The Way of the Warrior Week 3

Let’s return to the Lord’s training of David, in fighting Goliath.  We previously saw David take 5 smooth stones for this battle (1 Sam. 17:40). But we need to view an earlier phrase.

And there came out from the camp of the Philistines a champion named Goliath of Gath (1 Sam. 17:4).  Why does the Bible take note of Goliath’s hometown? Something happened in Gath, we need to examine.

In chapter 1 Sam. 5, Israel got their clock cleaned by the Philistines in a war. Philistines captured the Ark of God, and put it their temple with their god – Dagon.  The Philistines left it overnight and in the morning: Dagon had fallen face downward on the ground before the ark of the LORD, and the head of Dagon and both his hands were lying cut off on the threshold. Only the trunk of Dagon was left to him. (1 Sam. 5:4).  Hmmmm!

That should have been a clue for the Philistines, but they dismissed that event. Well, the Lord wants to get the point across to them so: The hand of the LORD was heavy against the people of Ashdod, and he terrified and afflicted them with tumors, both Ashdod and its territory.  (5:6).  The Lord gave them hemorrhoids!  That will get their attention!

The Philistines came up with a solution. “The ark of the God of Israel must not remain with us, for his hand is hard against us and against Dagon our god.” (5:7).  Okay, where to?

The hand of the LORD was against the city, causing a very great panic, and he afflicted the men of the city, both young and old, so that tumors [hemorrhoids] broke out on them. (5:9).  Isn’t God great?  This is the kind of judgment that ex-military types would choose.

Well, the legacy of this event would be known by future generations.  Read the story, and you’ll see how the Ark gets back to Israel.  But, the Philistines, just could not leave Israel alone. They attacked again and: As Samuel was offering up the burnt offering, the Philistines drew near to attack Israel. But the LORD thundered with a mighty sound that day against the Philistines and threw them into confusion, and they were defeated before Israel. (7:10).  The Philistines keep poking the Lord in the eye!  Not a good idea.

It is safe to assume that Goliath, knew all this.  He might have imagined all this was just coincidence. When he faced David, he had some sort of brain disfunction and forgets history. The Philistine said to David, “Come to me, and I will give your flesh to the birds of the air and to the beasts of the field.” (1 Sam. 17:44).  No mention of Jehovah, who had convinced his mama and papa, not to mess with Him.

David reminds him of some theological history. Then David said to the Philistine, “You come to me with a sword and with a spear and with a javelin, but I come to you in the name of the LORD of hosts, the God of the armies of Israel, whom you have defied. (17:45).  This is the place where Goliath should be saying: oh, oh!  Defying the Lord in the past did not work out well for the Philistines.  “I might be in trouble here,” should be screeching in his mind.

God is making all kinds of clamoring noises for Goliath to remember, but the gears in Goliath’s mind must be grinding to a halt.  Pride might be his blind spot.

David fearlessly goes on: This day the LORD will deliver you into my hand, and I will strike you down and cut off your head. (17:46).  Goliath’s mind has all kinds of data, streaming in, and he should get the hint. But his mind is not properly translating the facts.  He is not responding to David’s truthful revelation.  Responding to God’s Word is the core responsibility of all persons.  Goliath dismissing the truth does not take away the consequences, just because he doesn’t believe.  It becomes more damning, since rejecting direct revelation is like slapping the Lord in the face, then turning your back on him.  God’s glory doesn’t permit rejection, it will be addressed. Don’t tug on Superman’s cape!

David understands something Goliath is utterly missing.  This is not just a fight between two warriors, it’s a monumental fight that will reveal the glory and greatness of God – to the entire world!  This happened 3,000 years ago, and people all over the earth still talk about it!  David knew its significance.  Goliath missed it, though he knew about Jehovah.  The Lord is majestic, and will do great things, when he wants to make a point.

David adds more: and that all this assembly may know that the LORD saves not with sword and spear. For the battle is the LORD’s, and he will give you into our hand.” (17:47).  Not only would the whole world know about this fight between two combatants, both armies watching would be transformed.  They would have an accurate measure of how the Lord works in the lives of every man – whether believer or sceptic. Every observer is going to be touched by the hand of the Lord.  Every person in this moment must respond, either for or against the Lord.

Whoever is not with me is against me, and whoever does not gather with me scatters. (Matt. 12:30).  There is no fence sitting with the Lord.  This is a sobering revelation. Every person hearing David’s voice is responsible for the revelation that the Lord is giving.  One dismisses God’s Word at one’s own peril.  Goliath chose poorly.

There is one person standing and defending the Lord’s reputation and character before antagonists, and fear-filled men.  That is David.  Will you do the same?

So everyone who acknowledges me before men, I also will acknowledge before my Father who is in heaven, (Matt. 10:32 ESV). Spiritual warfare, is fought in the natural realm.  The Lord trained David well.  You are now in spiritual warfare training.  Are there giants on your horizon?  My guess is…that is a yes. 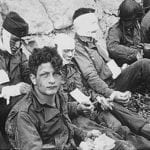 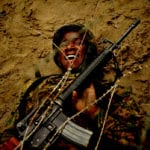