Because of Abraham -Intercession - The Warrior's Journey®
Skip to content

Because of Abraham -Intercession

Returning to base. Photo by The U.S. Army is licensed under CC By 2.0

So it was that, when God destroyed the cities of the valley, God remembered Abraham … (Genesis 19:29a)

Does a name, or names, immediately come to mind when you look at this blank? Without hesitation, I would write the name Sandra. Sandra taught me about the fundamentals of military life. I learned from her gracious example, as well as her responses to my myriad questions. The most important thing she taught me, however, was how to care for people in my sphere of influence. Sandra was the wife of the battalion commander at my husband’s first military assignment. She introduced herself the day we moved into military quarters. Soon afterward, she invited me to meet with her each week to pray for the military families in the battalion. In retrospect, I’m not sure what I expected from a commander’s wife, but I can say with conviction that prayer meetings were not on the list. 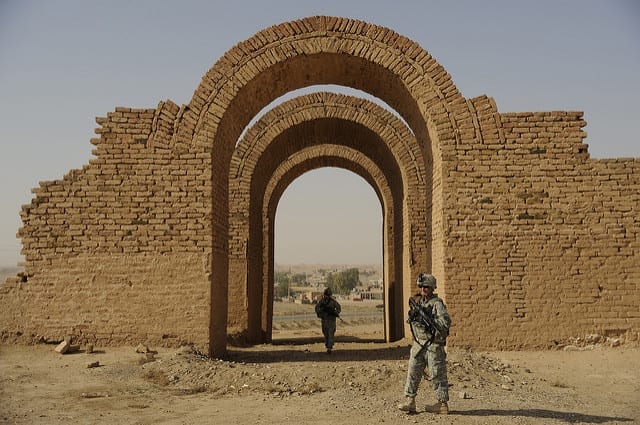 Sandra’s call to prayer illustrates a Christian principle: Christian maturity exhibits itself in caring for people. Abraham’s request of God to spare the city of Sodom was a good indicator that his relationship with God was growing. The situation in Sodom was beyond serious. The strangers who had just announced the wonderful news about the birth of a baby now announced horrific news about the destruction of a city. Abraham did not want to accept God’s plan for such severe judgment. There were people in the city. He had relatives in that city—remember Lot?

Here we see a baffled Abraham standing before a patient God who was waiting for Abraham to intercede on behalf of people in crisis.1 Abraham found his voice. This time he did not use it to lie about the identity of his wife, or laugh because he could not believe he would be a father. He used his voice to petition God on behalf of the needs of others. At first, he seemed a little hesitant to make such a request of God, but his tentative appeal became bolder as he asked for mercy even if only ten righteous people were to be found in the city.

Sadly, there were not even ten, but because of Abraham, Lot and his family were escorted out of town before the destruction came. Your prayers on behalf of others make a difference. Who will eventually write your name in their blank?

Do you regularly pray for the service members and families in your husband’s military unit? Is there someone who would join you in praying together consistently?

Lord, help me show my love for others through consistent prayer on their behalf. Thank you for the privilege of prayer and the promise that you are a God who hears. Amen.