Blood Is Thicker Than Water. Photo by Marines is licensed under CC By 2.0

The only way to defeat such an enemy was with the help of God.

Whenever Moses held up his hand, Israel prevailed, and whenever he lowered his hand, Amalek prevailed. But Moses’ hands grew weary, so they took a stone and put it under him, and he sat on it, while Aaron and Hur held up his hands, one on one side, and the other on the other side. So his hands were steady until the going down of the sun. And Joshua overwhelmed Amalek and his people with the sword. (Exodus 17:11–13)

Last week, I had one of those “feeling overwhelmed by life” days. It felt like the world was on my shoulders and, like Moses, I felt that all would be lost if my bone-tired arms let down. Have you experienced such days? Your husband is the one deployed, but you are the one who is battle weary. When you are weary from sleeplessness, anxiety, responsibility, or just hard work, even the smallest thing can quickly escalate to feel like a major battle that could be lost at any moment. 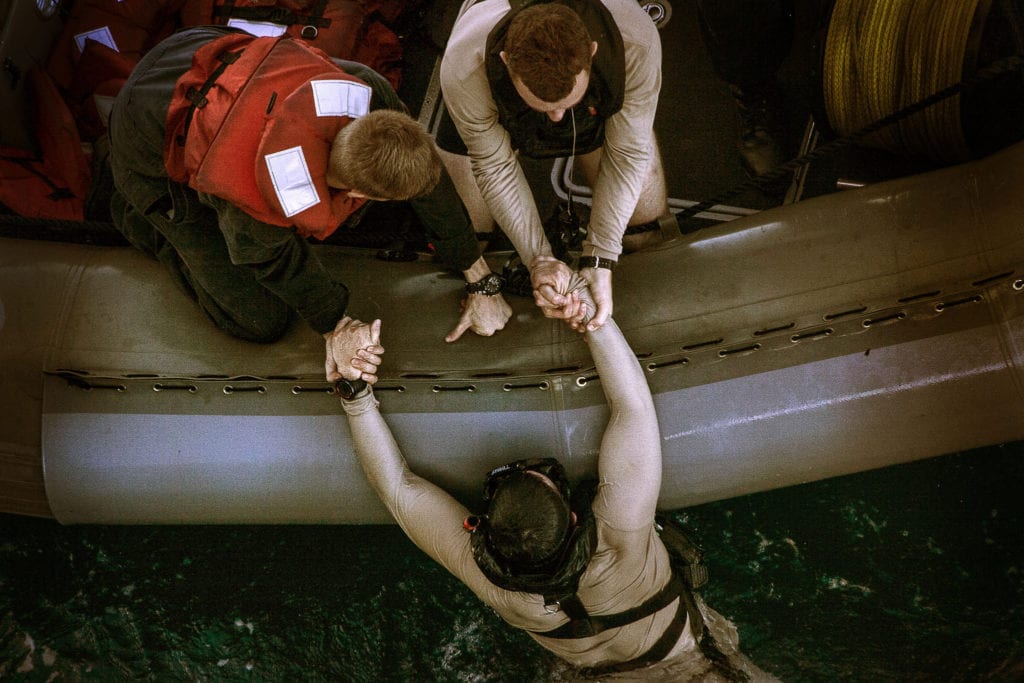 In Exodus 17, the Israelites encountered a frightening threat. This time it was not food or water; it was a live and fully armed enemy. The Amalekites were a group of nomads that roamed the desert and harassed anyone who came near their turf. They were a tough and aggressive force.1 The only way to defeat such an enemy was with the help of God. Moses standing on a hill as the mediator of God’s divine power is quite a picture. When Moses raised his arms with his staff in hand, the Israelites were in control of the battle, but when Moses’ arms were tired and started to drop, the Amalekites would gain momentum.

There was no magic in Moses’ arms. Ultimately, the battle belonged to the Lord. He brought victory as Moses stood with arms outstretched. But God used others to give physical and spiritual help to Moses in the battle. Aaron and Hur gave support, a term meaning to strengthen somebody else.2

We need people who are strong when we are weak. When our personal endurance is in short supply, we need the help and support of others. May I tell you that it is okay to be weak sometime? Allow others to help you during times of weariness.

I am guilty of thinking I have to always be strong for others, that I have to do things for myself, that I must hide my insecurities. These things lead to isolation, loneliness, exhaustion, and defeat. As hard as it is, I am learning to be more vulnerable during my times of weakness. When I felt overwhelmed last week, I sent a text to a friend and asked for prayer. Just now, as I approached writing this waypoint, I received a text from her: “I am praying for you today. As you allow God to fill you with his strength, he will enable you for the moment. Just confront this moment with the resources he places in your hand.”

My friend lives in another city. She does not know the details of my struggle. Yet, she held up my hands through prayer and words of encouragement.

Sister, who is holding up your arms today? Whose arms are you upholding?

How have you experienced help from friends during times of weakness? How can we provide such support for others?

Lord, just as you were present to help the Israelites fight their battles, you are present to help me fight mine. Remind me that I do not have to fight alone. Make me willing to share my needs with others and help me be available to help others. Amen.