Called by Name -The God Who Sees Me

Question and answer time with Lt. Gen. Benjamin C. Freakley. Photo by The U.S. Army is licensed under CC By 2.0

If you listen close you will hear God call your name to invite you on a journey of faith, fulfillment, and an eternal future with him

The angel of the Lord found her by a spring of water in the wilderness, the spring on the way to Shur. And he said, “Hagar, servant of Sarai, where have you come from and where are you going?” (Genesis 16:7–8a)

So she called the name of the Lord who spoke to her, “You are a God of seeing,” for she said, “Truly here I have seen him who looks after me.” (Genesis 16:13)

“Magic Mirror, tell me today, have all my friends had fun at play? I see Jana and Cathy, Karen and Tabitha. I see Billy and Gregory, Joseph and Ben.” Six-year-old me listened intently with the hope that my name would be called as Miss Marsha looked into her Magic Mirror. I watched Romper Room religiously, convinced that the perky TV host saw me on those rare times she called my name. 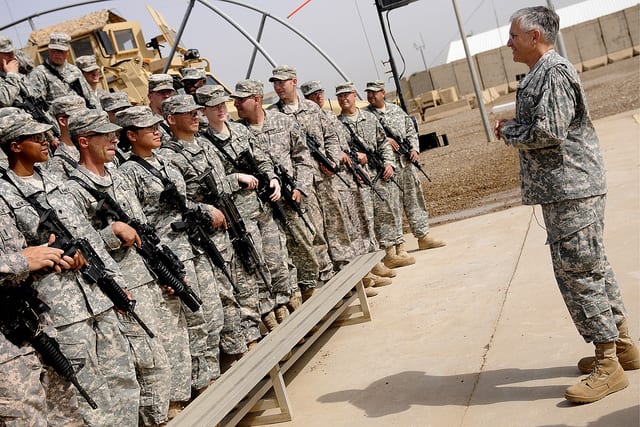 As a military wife my name and personal information sometimes do not seem very important. “Dependent” is the designation assigned to me on lists and official documents. I know my husband’s Social Security number, but often forget my own.

Hagar’s official documents might have read “slave.” Her role was to do what she was asked to do. She followed orders, and this time all it got her was Sarah’s wrath—and Abraham’s child, the reason for Sarah’s wrath. True, Hagar made a crucial mistake in going overboard with the “I’ve got something you want” attitude. Did she think she would now be seen and known as something other than slave since she was carrying Abraham’s baby? Sarah’s harsh treatment was the shove that sent Hagar on a solo journey into the wilderness.

The angel of the Lord found a despondent Hagar by a spring. He did something that had never been done by a heavenly being—he called her by name. He did not call her slave, or woman, or any of the derogatory names Sarah may have called her. He called her name—Hagar.

Even though she had been defiant and arrogant, God sent his angel to communicate a personal message, a personal promise—to her. His message was deliberate and purposeful and doesn’t even mention Abraham. God promised Hagar that—just like Abraham—she too would have many descendants.

The same God that saw Hagar sees you. The same God that offered hope to her dejected soul offers hope to you. If you listen close you will hear God call your name to invite you on a journey of faith, fulfillment, and an eternal future with him.

What comfort can you glean as a military wife from the encounter between Hagar and the angel of the Lord?

Lord, you see me, call me by name, and lead me out. As you go before me, help me to follow you and know your voice. Amen.