Help your buddy. Photo by The U.S. Army is licensed under CC By 2.0

What an encouraging story of God’s concern for Sarah.1 Consider that for her sake Pharaoh dealt well with Abraham to the point of giving him expensive gifts. There is no indication that Sarah was affected by the plague that assaulted Pharaoh’s household. Even after Pharaoh realized his association with Sarah had caused his affliction, it would have been understandable to order Abraham to return all the gifts, send him to prison, or decree a death sentence. Instead, he sent Abraham on his way along with Sarah and “everything he owned.” We have no clue of Sarah’s feelings but we see God’s actions, caring for her as he protected her and returned her to her husband. 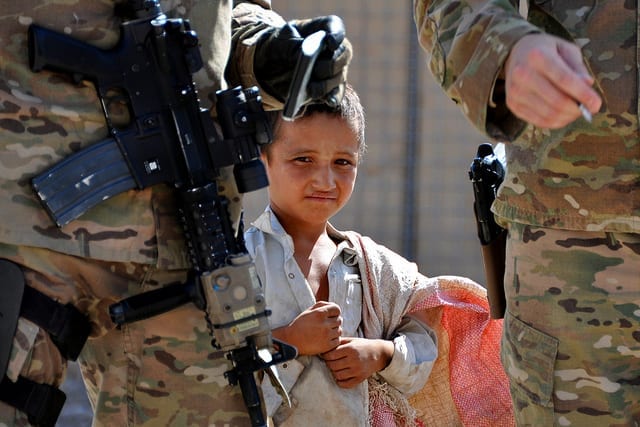 This kindness of God reminds me of a time God showed his care for me. My husband gave me a lovely ring for an anniversary. I had not had the ring long when I was volunteering at a gift shop sponsored by the Wives Club in Korea. I spent the day packing and unpacking boxes, checking merchandise for customers, and bagging purchases that were carried out the door to destinations near and far. At some point, I reached down to touch my new ring. My hand instinctively jerked upward as I discovered one of the diamonds was missing. I sadly retraced my steps, resigned to the fact that the stone was lost forever.

Later that day I opened my wallet to pay for a purchase. I could not believe what I saw. There among the coins was a beautiful little diamond. That stone could not have fallen out of its setting in a more protected place than my snapped-shut wallet.

The timing was not lost on me. Our family had just moved to Korea and I felt like that stone, as if I had fallen out of my setting. God showed me that day that I was precious to him. In his time, I would find the setting he prepared for me in this new place. It was enough for now to know he had not forgotten me.

God protected Sarah because she was an integral part of the promise he made to Abraham. Her setting in the plan was sure and God would bring it to pass in time.

There’s a place in his plan for you too. His care for you is certain and his love for you is undeniable.

Do you ever question God’s plan for you? What are some ways God has shown his care?

Lord, forgive me when I doubt your care for me. Help me to remember that nothing can separate me from your love. Amen.