Caring for Children -A Place to Hide

Making connections. Photo by The U.S. Army is licensed under CC By 2.0

I make no apologies. I ask that today, just for a moment, you bow your head and pray for the children who cannot hide from evil

Then Pharaoh commanded all his people, “Every son that is born to the Hebrews you shall cast into the Nile, but you shall let every daughter live.” (Exodus 1:22)

By faith Moses, when he was born, was hidden for three months by his parents, because they saw that the child was beautiful, and they were not afraid of the king’s edict. (Hebrews 11:23)

Imagine yourself pregnant. A “gender reveal” party is out of the question because your unborn baby may be a boy. You just want a healthy baby, but you pray this baby is not a boy. Why? The government has imposed a system of infanticide based on ethnicity, age, and gender, and you and your family fall into the target group.1 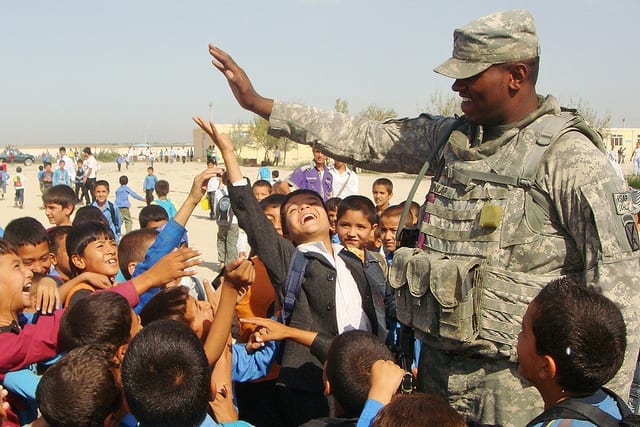 Amram and Jochebed, the parents of Moses, found themselves in such a predicament. An ordinary Israelite couple, they did not know the history of a nation rested on the way they would handle this crisis. How do you hide a baby?

Jewish families during World War II faced a similar predicament. The gut-wrenching stories of Hitler’s systematic eradication of Jews left no more than 11 percent of Europe’s pre-war Jewish population of children alive.2 As the war progressed, many Jews sought to evade Hitler’s henchmen by hiding their children. This difficult decision created major complications for parents. Where would they send the children for safety? How would they pay the often exorbitant fee for protection? More than not, Jewish parents who survived the war and reunited with their children reported severe psychological trauma that prohibited a return to normal family life.3

We do not have to go all the way back to World War II to see how the ravages of war still affect the innocent. Crises around our globe cause parents to flee in order to hide their children from the catastrophe of war. We in the United States rarely fathom such fear and loss. Too often, we are the ones who hide from the reality of what is going on in the rest of the world.

I know this is not a feel good devotional thought. I make no apologies. I ask that today, just for a moment, you bow your head and pray for the children who cannot hide from evil. Pray for parents who want safety and peace for their children. Pray for parents who hope and dream for a better future for their children. Then hug your child a little tighter and ask God to make us all change agents in a world longing for peace.

If your children are old enough, consider reading together and discussing The Hiding Place, The Diary of Anne Frank, or The Book Thief. Do some research on agencies that are helping children displaced by war. Involve your children in finding a way to send financial support to one of these agencies.

Lord, I pray for children displaced because of war and violence. Provide shelter, sustenance, and protection. I pray for peace in lands ravaged by war. Show my family and me ways we can be a blessing and an agent of hope. Amen.