For These Children I Prayed - The Warrior's Journey®
Skip to content

For These Children I Prayed

Reaching out. Photo by The U.S. Army is licensed under CC By 2.0

How long do we hold our children up before the Lord in prayer?

“For this child I prayed, and the Lord has granted me my petition that I made to him. Therefore I have lent him to the Lord. As long as he lives, he is lent to the Lord.” (1 Samuel 1:27–28)

Samuel was ministering before the Lord, a boy clothed with a linen ephod. And his mother used to make for him a little robe and take it to him each year when she went up with her husband to offer the yearly sacrifice. Then Eli would bless Elkanah and his wife, and say, “May the Lord give you children by this woman for the petition she asked of the Lord.” So then they would return to their home. (1 Samuel 2:18–20)

When I read Hannah’s story I think of the many military wives who have sent not only a husband to war, but a child as well. A parent’s concern for a child’s safety does not end—no matter the age. Such concern was the impetus for a group of mothers to come together during World War II to form the Blue Star Mothers of America. This organization continues to provide support to parents with children in military service. The name originated from the Service Banner with blue stars hung in the window of a home. Each star represented a family member serving in war.1 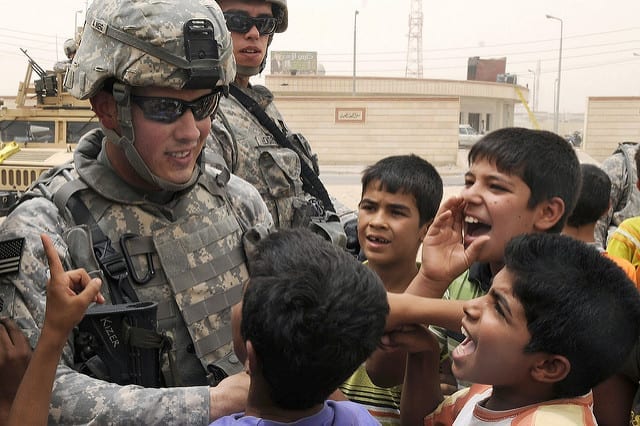 One military wife and mom I know sent her Ranger husband off on dangerous assignments many times. Today her oldest son has been in some challenging situations as an Army Military Intelligence officer and her youngest son serves with the Air Force’s Special Operations team. She said, “It feels different to have your children go through dangerous and difficult training and then be sent down range. I was always concerned for my husband, but I felt like he could take care of himself. My mother’s heart is inclined to protect and shelter my kids, no matter what age. I know my children serving in the military are very much the subjects of my prayers. I also know that their need for prayer has blessed our family in keeping us united in our concern for them.”

Hannah did not make and hang a Blue Star Service Banner in her window to indicate the service of her son in the temple. She used her sewing skills to make a robe she carried to him each year, demonstrating her love and concern. The robes met little Samuel’s need for clothing and warmth. Yet the robes symbolized so much more. They reminded Hannah of God’s answer to her desperate prayer and were a witness to the Lord that she had been faithful in keeping her promise to him. No doubt, Samuel was reassured that his mother thought of him often and loved him very much. I can also imagine that Hannah told Samuel something like, “Every day when you put on this robe, remember how special you are to me and to God. You are a blessing!”

The Bible does not record how many years Hannah brought Samuel a new robe. I would guess as long as she was able. How long do we hold our children up before the Lord in prayer? Let’s continue as long as we can formulate a thought and take a breath.

Lord, help me find ways throughout the day to share the blessing my children are to me. Thank you for the gift of children. Amen.