Dedicated to a Promise- Abraham’s Reward

Lancero Badge. Photo by The U.S. Army is licensed under CC By 2.0

Abraham’s reward was not for leading a victorious battle, because God was the one who brought the victory. The reward was for his faith

After these things the word of the Lord came to Abram in a vision: “Fear not, Abram, I am your shield; your reward shall be very great.” (Genesis 15:1)

Aren’t you impressed when you see a chest full of ribbons or medals on someone in the military? Each has a story. Each represents a mission. Some medals represent completion of time in a job while others represent hazardous duty or exemplary service.

We occasionally read about people who display ribbons they did not earn. In an effort to appear more brave, accomplished, or advanced they may purchase ribbons at the Clothing Sales Store. Such ribbons count for nothing. Only medals presented by a legitimate leader count as a true reward. 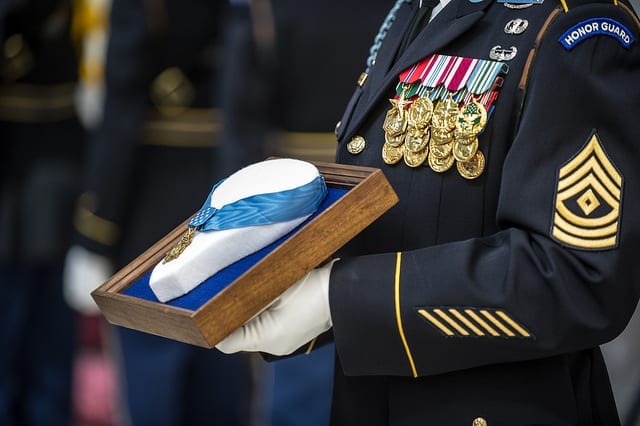 Call me crazy, but Genesis 15 reminds me of a military ribbon ceremony. Think about it: Abraham has just fought a successful military campaign and he stands before his Commander, who tells him, “I will give you a great reward.” Abraham’s reward was not for leading a victorious battle, because God was the one who brought the victory. The reward was for his faith.

The only reward that would mean anything to him, though, would be a son—and that was impossible at his age. Abraham questioned God. He reasoned that the reward of an heir would have to come through one of his servants, which in his mind was like going to the Clothing Sales Store and buying one of those fake ribbons for his chest. I don’t blame Abraham for such thoughts. Wouldn’t you question the idea of becoming a first-time father if you were beyond the age of a grandpa?

God did not place any stars of award on Abraham’s chest or shoulders, but he told him to go look up at the sky and try to count the stars. Abraham’s reward would be that great and it was going to start with his son—his very own “born-in-his-old-age” son. Do you know what Abraham did when God said this to him? He believed. He believed. His journey had brought him to a place where he trusted what God said. He believed it even if he did not see it.

Lord, you revealed more of yourself to Abraham in the midst of his doubts. Help me to believe you are at work in my life, even when I do not see you. Amen.