The First Step is the Hardest

Yes, the first step was the hardest, but he’s been with me each step of the way

So Abram went, as the Lord had told him, and Lot went with him. Abram was seventy-five years old when he departed from Haran. (Genesis 12:4)

Abraham was born in a city called Ur, a place located in the south of what we now know as Iraq—yes, that Iraq. Heard of it? Scholars tell us that Ur was a thriving city filled with educational, cultural, and economic opportunities. Abraham’s father Terah then moved the family north and west to the city of Haran (Genesis 11:31). When his father died, God directed Abraham to leave Haran and go to Canaan (see also Acts 7:4). The call God gave to Abraham was blunt. He used two action words military families know well: leave and go. 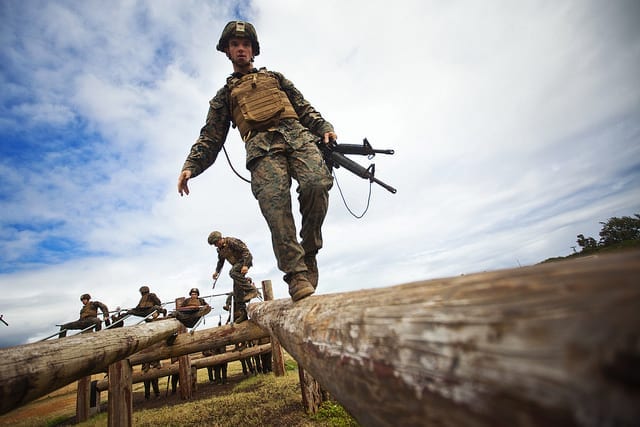 At face value this directive does not seem such a challenge, but when you look at the culture of the Near East, you see this challenge was more than meets the eye. In Abraham’s day to leave your family was to leave your significance and security. God asked Abraham and his wife Sarah to leave behind their country, their nationality, their clan, and ultimately their identity.1

Maybe you can relate to this story. Perhaps you lived in a city you enjoyed, surrounded by family and friends. One day an official document headlined ORDERS arrived with the order to leave and go to an unfamiliar place. No journey can commence without a first step, and my guess is the first step out of Haran was a hard one for Abraham and Sarah, just as it may have been for you.

My friend Kay recalls the day her husband entered military service. She had been born and reared in the same small town where her family had deep roots. The idea of living anywhere else was unthinkable, yet that is what she did as a military wife. When asked about what made leaving her hometown so difficult she said, “I was afraid of the unknown. I didn’t know who I was outside my homogeneous bubble.” If you talk to Kay today she will tell you the first step was the hardest, but she would do it all over again in a heartbeat: “The journey has been amazing! I thought I would lose my identity when I left home. Instead, God has used military life to grow me into who he called me to be. Don’t get me wrong, I love my hometown, but God had a plan that included me taking a step into unknown territory. Yes, the first step was the hardest, but he’s been with me each step of the way.”

Is God asking you to take a step of faith in some area? What keeps you from taking the first step?

Lord, give me courage to take the first step

to leave the familiar

to meet a new neighbor

to get involved in a ministry

to forgive a friend

to make a wise choice.

Help me step out in your name and in your power. Amen.