Jacob and Rachel—You Marry a Family

Marine and his family honor Medal of Honor recipient Cpl. Jason Dunham. Photo by Marines is licensed under CC By 2.0

They say you do not just marry a person, you marry a family.

Then Jacob went on his journey and came to the land of the people of the east. (Genesis 29:1)

As we saw, with the help of his mother, Jacob tricked his father Isaac out of the blessing that rightfully belonged to his older brother Esau. In fear of retribution from Esau and at his mother’s suggestion, Jacob fled to the land of his uncle Laban. There he encountered the beautiful Rachel and fell hopelessly in love with her. The story has the feel of a Hollywood movie, complete with a show of strength from the leading man, long arduous glances, a kiss, and even tears. It is quite a moving story—until Rachel’s dad inserts himself. 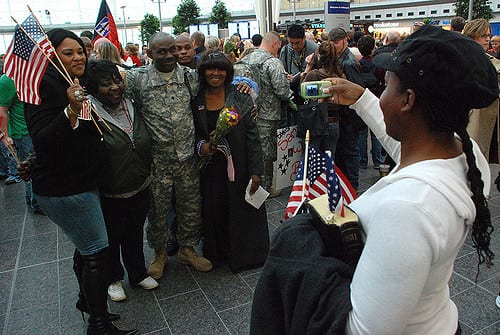 They say you do not just marry a person, you marry a family. The truth is, you marry into a family and you have to deal with the customs, behaviors, and attitudes embedded in that family. You have to take the family’s claims on your spouse into consideration. In Jacob’s case, his greedy future father-in-law’s claim on Rachel frustrated Jacob’s immediate marriage plans. Laban agreed to allow Jacob to marry Rachel, but he did not keep his word. Instead he tricked Jacob into first marrying his daughter Leah. Though Laban then allowed Jacob to marry Rachel, he required an additional seven years of work. Do not miss the detail that Laban was Jacob’s uncle. His sharp dealings give an indication of his character; he shows a pattern more like an oppressive lord over a contracted servant rather than a supportive uncle helping a relative. Yes, Jacob ran headlong into in-law problems from the moment he met Rachel.

On the one hand, you might say that with Laban Jacob met his match and got some of his just desserts for his selfish actions with his own family. On the other hand, you can see through Jacob’s willingness to work hard and fulfill a contract that God used this situation to refine his character.1

Western culture does not practice attaching a dollar amount to a spouse anymore, but families still exert a sense of “ownership” that couples must take into consideration. No couple is immune from challenges that arise from their family-of-origin experiences. Each couple must learn to celebrate the differences and turn them into strengths as you value what each brings into a marriage.2

Lord, thank you for my in-laws. If not for them, I would not know my husband. I pray your blessings upon them. Help us to have a good and positive relationship of mutual support. Amen.