Laughter or Service? - The Warrior's Journey®
Skip to content

Sgt. Dakota Meyer enjoys a light-hearted moment during his Medal of Honor presentation ceremony. Photo by Marines is licensed under CC By 2.0

They came to the house of the ruler of the synagogue, and Jesus saw a commotion, people weeping and wailing loudly. And when he had entered, he said to them, “Why are you making a commotion and weeping? The child is not dead but sleeping.” And they laughed at him. But he put them all outside and took the child’s father and mother and those who were with him and went in where the child was. Taking her by the hand he said to her, “Talitha cumi,” which means, “Little girl, I say to you, arise.” And immediately the girl got up and began walking (for she was twelve years of age), and they were immediately overcome with amazement. And he strictly charged them that no one should know this, and told them to give her something to eat. (Mark 5:38–43) 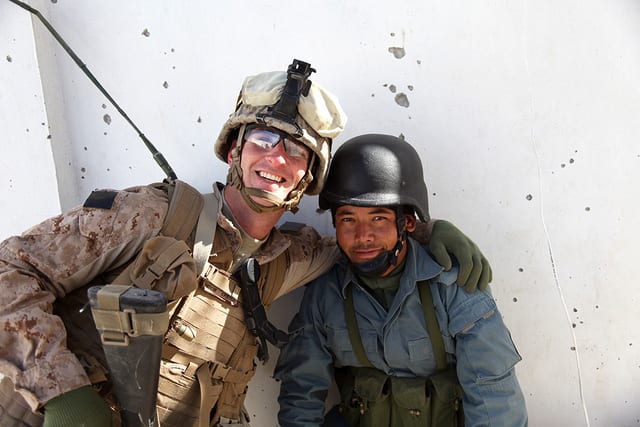 Here’s a question for you: If you were there the day Jesus made the audacious claim, “The child is not dead but sleeping,” would you be among those who laughed at him, or among those who would get up and give her something to eat when her life returned? Both?

Earlier in Mark 5, Jairus, the girl’s father, went to find Jesus to plead with him to come and help his daughter, but Jesus was delayed and word came the daughter died. He had faith that Jesus could heal her, but now she was dead. All hope was gone. All faith was lost. She was not asleep. She was dead. The very presence of the mourners confirmed her demise.1 Then this man Jesus made the foolhardy statement that she is not dead, only sleeping. Laughable.

Granted, laughter is a natural response to something that sounds outlandish. Laughter was ninety-year-old Sarah’s response in Genesis 18:12 when God told her she would have a child in her old age. Her husband laughed as well when he received the same message. There was laughter of a different sort when their baby boy Isaac was born.

Back in the home of Jairus, Jesus touched the girl and she was no longer dead. He restored her to life. The laughter of unbelief surely turned to laughter of amazement in that place! Life needs nourishment, so Jesus commanded someone to give her something to eat. Oh, I hope I would be the one to jump up to get food to fill that girl’s belly, laughing joyfully all the way to the kitchen!

Lord, it is easy to laugh at things we find unbelievable. Your lavish love and unmerited grace are sometimes hard for me to believe. Forgive me when I laugh in disbelief that they can be mine. Amen.