A Mountaintop Perspective - The Warrior's Journey®
Skip to content

Hilltop security. Photo by The U.S. Army is licensed under CC By 2.0

They witnessed the glory of God, and it changed their perspective

And after six days Jesus took with him Peter and James and John, and led them up a high mountain by themselves. And he was transfigured before them, and his clothes became radiant, intensely white, as no one on earth could bleach them. And there appeared to them Elijah with Moses, and they were talking with Jesus. And Peter said to Jesus, “Rabbi, it is good that we are here. Let us make three tents, one for you and one for Moses and one for Elijah.” For he did not know what to say, for they were terrified. And a cloud overshadowed them, and a voice came out of the cloud, “This is my beloved Son; listen to him.” And suddenly, looking around, they no longer saw anyone with them but Jesus only. (Mark 9:2–8) 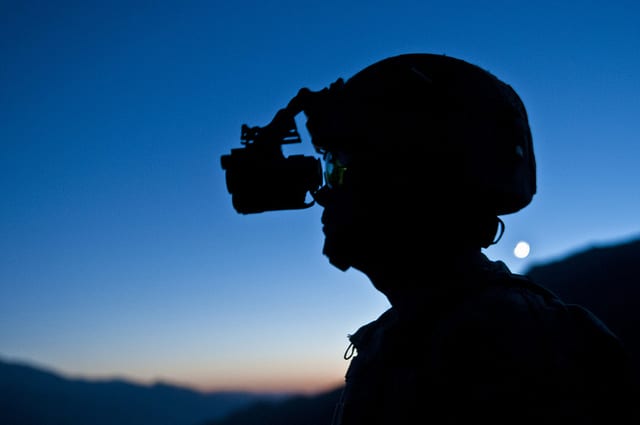 Perspective has to do with the way objects appear or how we see them. For instance, a realtor may use a wide-angle camera to make a room look larger.  Perspective can also be defined as a mental view or outlook. Sometimes just placing myself in a different environment gives me an improved perspective on my circumstances.

Recently, I spent a week in the mountains of Colorado with some military wives who are in the midst of deployment. Mountain air, picturesque vistas, time to linger around the table, deep and meaningful discussion all contributed to a refreshed perspective of how to thrive in a less than optimum situation. We left that mountain with renewed courage and energy to love and serve others.

One day Peter, James, and John spent some time on a mountain with Jesus. On that mountain, their perspective on Jesus changed. If they had any doubt of the identity of the one they had left everything to follow, those doubts were finally put to rest. (Can we all say together: It’s about time!) How do you argue with clothes that become radiant before your eyes, a conversation with ancient prophets, and the voice of God using a cloud as a megaphone to endorse his Son? This scriptural account of these special effects received the name: the Transfiguration. The disciples witnessed a physical change in Jesus as he interacted with Moses, Elijah, and God the Father. When they witnessed the glory of God, it changed their perspective.

These disciples saw God as few on earth have. God did not use smoke and mirrors or the latest digital rendering, but through his miraculous power, he revealed a small glimpse of Jesus’ true glory. Whenever the Lord opens our eyes of faith to see a little more of him, we too come down the mountain not with only a new perspective on him, but as better people for him.

What is your perspective on Jesus now? Do you need to get off the trail and get alone with the Lord in order to gain a fresh view?

Lord, give me eyes of faith to see more of your glory today. Amen.

In article photo: Nightwatch by the U.S. Army licensed under CC BY 2.0