Birds, Smoke and EOD. Photo by Marines is licensed under CC By 2.0

Through a chain of unexpected good events, God raised Naomi from her lowest point of despair to an elevated position in a distinguished family lineage in Israel

In the days when the judges ruled there was a famine in the land, and a man of Bethlehem in Judah went to sojourn in the country of Moab, he and his wife and his two sons. The name of the man was Elimelech and the name of his wife Naomi, and the names of his two sons were Mahlon and Chilion. They were Ephrathites from Bethlehem in Judah. They went into the country of Moab and remained there. But Elimelech, the husband of Naomi, died, and she was left with her two sons. These took Moabite wives; the name of the one was Orpah and the name of the other Ruth. They lived there about ten years, and both Mahlon and Chilion died, so that the woman was left without her two sons and her husband. (Ruth 1:1–5)

Do you think Naomi ever said, “When I grow up, I want a famine to come and force my family to move to a foreign country where my husband and two sons will die, leaving me two foreign daughters-in-law as my only family?” Of course not! Scripture never suggests Naomi deserved or desired the tragic events behind her unexpected transition. Living in an imperfect world exposes us to tragedy and disappointment and forces us to adapt. Naomi was at the intersection of tragedy and transition. 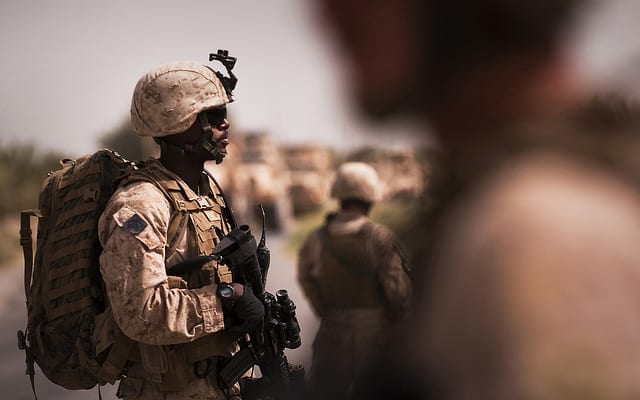 Military culture can also precipitate hard, unwanted transitions that test a wife’s resilience. The basic mechanics of how the military functions come with built-in consequences of hardship for some. The military’s rank structure produces promotion parties for those selected to advance in rank and quiet grieving for those who are not. The military’s mission to protect the nation produces cheering citizens along a parade route for those who survive combat and somber processions at a national cemetery for those who do not. Military wives do not get to choose where they will be standing with their husband.

Naomi has something to say to military wives who face unwanted and unexpected transitions. She did not coast through her tragedies as an unscathed observer. She was devastated. Later in Ruth 1:20, Naomi says, “Do not call me Naomi [Sweet one]; call me Mara [Bitter one],1 for the Almighty has dealt very bitterly with me.” In her worldview, God was responsible for what had happened in her life.2 When you consider Naomi’s dire situation, her bitter outlook on life and her questioning of God’s role in it all are understandable.

But don’t write her off too soon, because even at her lowest point, she was a survivor—in fact, she thrived! When she lost everything in Moab, she took the next step to journey home to Bethlehem. Through a chain of unexpected good events, God raised Naomi from her lowest point of despair to an elevated position in a distinguished family lineage in Israel. He took her bitter heart and sweetened it with his divine blessings.

Sister, we can find hope as we observe Naomi’s life journey. In the darkest hours, the Lord can shine a light to help us find our way through the most difficult transitions.

When have you experienced an unexpected and unwanted transition? How did you get through that difficult time?

Lord, help me trust you even in times when I do not understand what is happening. Protect my heart from bitterness so the work of your Spirit in my life will flourish. Amen.