The Road to Emmaus—a Heart Transition to Truth

Sniper School. Photo by Marines is licensed under CC By 2.0

The Scriptures reveal Jesus, the Lord, who is the way, the truth, and the life

That very day two of them were going to a village named Emmaus, about seven miles from Jerusalem, and they were talking with each other about all these things that had happened. While they were talking and discussing together, Jesus himself drew near and went with them. But their eyes were kept from recognizing him. And he said to them, “What is this conversation that you are holding with each other as you walk?” And they stood still, looking sad. (Luke 24:13–17)

My husband recounts an embarrassing experience as a brand-new military chaplain. He visited a training site to talk with recruits going through initial entry training. As he came to the wooded area the only men present were the sergeants-in-charge. He asked one, “Where are the troops?” The sergeant motioned towards the trees and replied, “Right there.” My husband looked around and saw no one. Puzzled, he asked again. At the order of, “On your feet,” 150 well-camouflaged troops rose from the underbrush, some only steps away from my husband. The troops were right in front of him, but he could not see them. 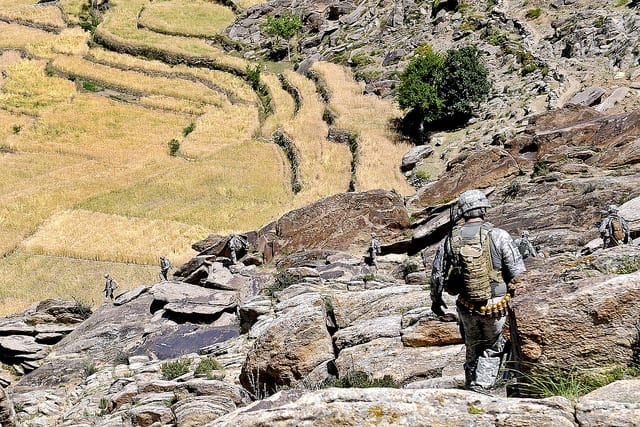 The disciples on the Emmaus road experienced a similar event with Jesus. They were walking home from Jerusalem, sad and confused, trying to make sense of the past few days. They had watched the one whom they thought was going to be the redeemer of Israel executed on a cross and sealed in a tomb. Now three days later, some of the women said they had seen him, and the body of Jesus was gone. What was going on?

Jesus caught up with the two as they walked and asked them what they were discussing. They had probably seen him many times, but the pair did not recognize Jesus. Scripture says “their eyes were kept from recognizing him.” If I had been Jesus on this occasion, I would have grabbed the two around the neck and said, “Hey guys, cheer up. It’s me!” Instead, he joined their journey and added words of hope to their conversation.

Something mystically beautiful strikes me when I think of Jesus walking with them in their darkest hour. As questions filled their minds, as sorrow filled their hearts, as their purposes and plans had just died on a cross, Jesus walked with them. Jesus modeled for us what to do when someone is hurting and looking for answers and meaning during a difficult time in their life.

Jesus joined them where they were physically and began to take them where they needed to be spiritually. He gave them the pieces to the big picture about himself from the the Scriptures, but they did not yet see how the pieces fit together. Later they described feeling their hearts burn within as he talked with them along the road (verse 32)—the type of excitement that builds when you feel on the verge of discovery, but not quite there yet.

Transition to truth starts when someone comes alongside another sojourner and shares accurately the Word of God. The Scriptures reveal Jesus, the Lord, who is the way, the truth, and the life. He is willing to walk with us when we cannot see him, and invites us to walk with him to see the truth.

Has someone come alongside and helped you understand truth? Jesus not only spoke truth to these disciples, he brought hope. How has God’s Word brought you hope in times of transition?

Lord, thank you for the truth of your Word. Help me to live that truth out in my words and actions today. Amen.