Shut Up and Stand Up- Different Challenges During Different Seasons

On watch. Photo by The U.S. Army is licensed under CC By 2.0

Challenges present themselves in a different way during this season of deployment.

When Pharaoh drew near, the people of Israel lifted up their eyes and behold, the Egyptians were marching after them, and they feared greatly. (Exodus 14:10a)

And Moses said to the people, “Fear not, stand firm, and see the salvation of the LORD, which he will work for you today. For the Egyptians whom you see today, you shall never see again. The LORD will fight for you, and you have only to be silent.” (Exodus 14:13–14) 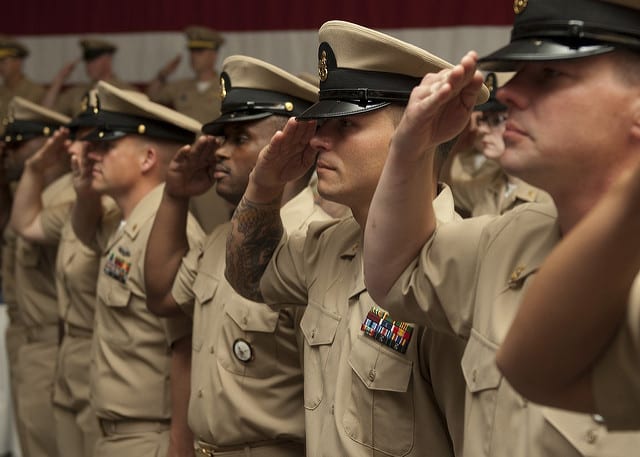 I know this waypoint carries a bold title, but in essence, this is what God, through Moses, said to the Israelites. God was not speaking to comfort troubled, anxious hearts. No, he spoke to motivate weak, pathetic faith.1 God brought the children of Israel out of Egypt because he heard their cry for help and deliverance. They did not get very far before they lifted different cries.

It is easy for me to identify with the Israelites. Put me in a precarious situation and my imagination can take off in all kinds of unhealthy directions. I then just need a swift kick in the rear to help me get a grip and to jolt me into reality, as Moses did by telling the Israelites to “stand firm and shut up!”

Here is the twist: The Israelites were afraid of the Egyptians. These were the same Egyptians the Israelites lived with and around for hundreds of years. The Israelites may have felt anger and frustration toward their taskmasters, but never this kind of fear. Why? They had never seen the Egyptians come against them as a hostile army. They knew the sting of their whips, but now they faced the point of their spears.

Sister, do you see the connection? Challenges present themselves in a different way during this season of deployment. Existing situations may now become threats as they awaken weakness. Some of your same may begin to look very different during deployment.

Existing situations may now become threats as they awaken weakness

You may have experienced anxiety, temptation, or feelings of hopelessness before, but deployment can make them look darker, and more difficult to overcome. The circumstances at home and your surroundings may not have changed, but they can present in a different way because of your husband’s absence.

Guard yourself against thin-skinned faith and know the Lord can fight for you. Just as he drowned the Egyptian threat, he can drown the anxiety that can control you, the temptation that can destroy you, and the hopelessness that can defeat you.

I am not going to tell you to shut up, but I am going to encourage you to fear not and stand firm!

How have you experienced your “same” looking “different” during difficult seasons such as deployment? What are some ways you can guard against “thin-skinned faith?”

Help me to be strong and courageous. Deliver me from fear and discouragement. Remind me that you are my God and you are with me wherever I go (Joshua 1:9). Amen.