Storm of Life -No need for a life preserver

Search and rescue swimmers swim towards Sailors as they jump off aircraft elevator No. 4 during a swim call aboard the Nimitz-class aircraft carrier USS Carl Vinson (CVN 70).. Photo by U.S. Navy is licensed under CC By 2.0

On that day, when evening had come, he said to them, “Let us go across to the other side.” And leaving the crowd, they took him with them in the boat … And a great windstorm arose, and the waves were breaking into the boat, so that the boat was already filling. But he was in the stern, asleep on the cushion. And they woke him and said to him, “Teacher, do you not care that we are perishing?” And he awoke and rebuked the wind and said to the sea, “Peace! Be still!” And the wind ceased, and there was a great calm. (Mark 4:35–39)

As I type these words I watch a storm move across the ocean and spill onto the shore. The storm made a quick debut and the scene on the beach is anything but peaceful. The wind is blowing; people are frantic to pull down umbrellas and tents. And the beautiful morning had held such promise of a lazy day of beach-bum perfection. 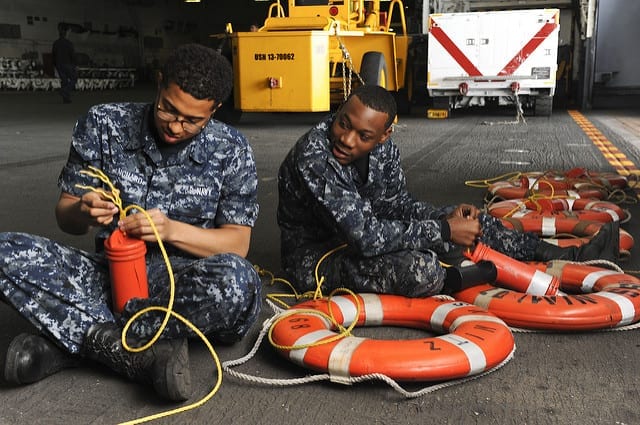 Storms, literal or symbolic, can be swift and unexpected. But they are going to come. Even when you are serving Christ storms will come. The disciples would tell you storms come even when Jesus is right next to you.

The event described in Mark 4 was not your average storm. This storm threatened to overwhelm the boat with its furious wind. The disciples found themselves in a desperate situation and they were terrified. Don’t miss the irony here: the carpenter, Jesus, was resting peacefully while the professional fishermen, James, John, Andrew, and Peter, were frantic with fear.1 Jesus was able to sleep because of his trust in God. The disciples did not see trust in his relaxation; they saw a lack of care and concern for their welfare.

Nothing was farther from the truth. Jesus was concerned enough for the disciples that he calmed the storm and gave them an “aha!” moment as they began to grasp who he really was (Mark 4:40–41). On a day when the disciples thought they would simply sail to the other side of the sea, they got a glimpse of the true identity of this one they followed. Only God had such power over nature. This storm became training ground for them to learn more of God’s power.

There are days when my boat feels like it is capsizing. I share the anxiety expressed by poet e. e. cummings when he wrote, “King Christ, this world is all aleak; and lifepreservers there are none.”2 Those are the days I remind myself I don’t need a life preserver because Jesus is in the boat with me.

On a scale of one to ten, what is your response to storms of life, if one represents fear and ten represents faith?

Lord, thank you that you are “a refuge and a shelter from the storm and rain” (Isaiah 4:6). Amen.