Tempted in the Downtime- Guard Your Heart while Waiting

Sgt. Maj. of the Army Visits TF Blackhawk. Photo by The U.S. Army is licensed under CC By 2.0

Some have convinced themselves that adultery, substance abuse, or excessive shopping and eating can replace faithful waiting

When the people saw that Moses delayed to come down from the mountain, the people gathered themselves together to Aaron and said to him, “Up, make us gods who shall go before us. As for this Moses, the man who brought us up out of the land of Egypt, we do not know what has become of him.” (Exodus 32:1) 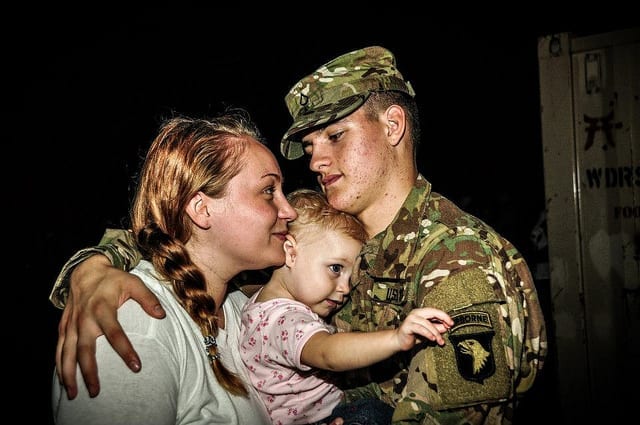 When Glendon Perkins became a prisoner of war in North Vietnam, his wife Kay knew she would need strength to survive and to raise their four children. But she didn’t know how much strength it would take. And she didn’t know she would need it for six and a half years. “Now it seems like it was such a short time,” Kay Perkins said. “While I was living through it, though, it seemed like an eternity.”1

Kay Perkins waited for her husband to return from war for over six years. She was faithful. She was vigilant. She even found ways to help other wives who were waiting for their husbands to return. Glendon and Kay did not become a negative statistic of war.

The Israelites needed Kay Perkins around while they waited for Moses to return from atop the mountain. When Moses went on Operation Ten Commandments in the clouds with God, the Israelites down below did not know if he was just delayed or if he would even return at all. Moses was gone approximately six weeks when the Israelites became impatient. Their impatience implied that God had lost control of the situation.2 Their faith in God was weak, so in the downtime they decided to take matters into their own hands.

Their faith in God was weak, so in the downtime they decided to take matters into their own hands

A later generation describes the scene in the Psalms: “But they soon forgot his works; they did not wait for his counsel. But they had a wanton craving in the wilderness, and put God to the test in the desert; … They made a calf in Hebron and worshiped a metal image. They exchanged the glory of God for the image of an ox that eats grass.” (Psalm 106:13–14, 19–20)

The Israelites went to Aaron and asked him to make a god they could see and touch. Aaron took their gold earrings and formed them into a golden calf. The guidelines for their new god allowed them to engage in immoral behavior. The situation that unfolded illustrates that when people give up on God, they turn to something else to satisfy their basic human nature.

Sister, guard your heart and mind in the downtime when mentally you know your husband will return, but emotionally it feels like it will never happen. Some have convinced themselves that adultery, substance abuse, or excessive shopping and eating can replace faithful waiting. Such activities only serve as an insufficient and superficial replacement for a close relationship with God that will enable you to wait faithfully.

What are some boundaries you can set for yourself in the downtime as you wait for your husband to return? What danger is there in dwelling on the thought that deployment is taking too long?

Lord, it can be hard to wait. I grow impatient and restless and sometimes my imagination gets the best of me. Deepen my trust in you during times of waiting. Give me a calm assurance that your presence is with me and the waiting will soon be over. Amen.