Headed home. Photo by The U.S. Army is licensed under CC By 2.0

Your encouragement can be your child’s home, no matter where you live

On the third day there was a wedding at Cana in Galilee, and the mother of Jesus was there. Jesus also was invited to the wedding with his disciples. When the wine ran out, the mother of Jesus said to him, “They have no wine.” And Jesus said to her, “Woman, what does this have to do with me? My hour has not yet come.” His mother said to the servants, “Do whatever he tells you.” (John 2:1–5)

The statements above describe my emotions when my family moved from North Carolina to Washington D.C. at the same time my oldest son left home to attend college in Tennessee. The transition felt brusque and harsh to me. Over the next few months we adjusted to D.C. as our new home, but when our son came to D.C. on school holidays he felt like he was visiting a strange city. 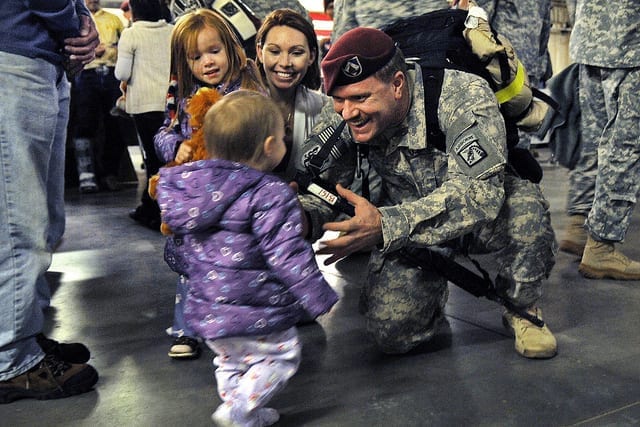 The shift from being supervisor of daily activities to mentor of an adult child is a necessary and natural adjustment for parents and children. However, the change in roles can feel curt for military families when home base suddenly changes to an unfamiliar location.

Mary had to feel some of the same emotions as her parenting role shifted. After all, how do you parent the Son of God? No miracles are recorded in the New Testament up to the miracle described in John chapter two, but this was the beginning of the public ministry of Jesus. Jesus performed this miracle at the prompting of his mother. Things would not be the same after this miraculous event.

The response of Jesus to Mary’s request may seem harsh to our Western way of thinking, but when Jesus addressed Mary as “woman,” he took the necessary step toward redefining their roles. His identity moved from son to Savior. He was not only the son of Mary; he was also the Son of God. He willingly responded to her request to do something to help the bride and groom, but he did not do it under her authority. This time he moved in the authority granted him by God.1 Mary’s response was exemplary. She did not take offense, question him, or rebuke him for his response to her. She trusted him to do the right thing, illustrated by her command, “Do whatever he tells you.”

Whether the adjustment is a swift ninety-degree turn or a slow curve, remember that parents still play an important role as children leave home. Your role as one who believes and trusts in our children’s God given talents and gifts will not change. Your encouragement can be your child’s home, no matter where you live.

How was your experience when you left home for the first time? In what ways would you want it to be the same or different for your child?

Pray for someone you know who sent a child to college this year. Let them know you prayed for them today.