I Dare You - The Warrior's Journey®
Skip to content

No Airport? No Problem!. Photo by The U.S. Army is licensed under CC By 2.0

The website LiveScience.com published the story of a man in China who deliberately swallowed a metal spoon. Now, I’m not sure how much forethought went into his decision to swallow something too rigid to pass through his intestines. The intestines constitute a very winding path for whatever passes through them. An eight-inch spoon is not very flexible.

Anyway, the spoon didn’t even get that far. It became uncomfortably stuck in his esophagus. And there it remained for an entire year. Not until someone punched him in the chest did he finally go to the doctor for help. The pain became unbearable. Doctors removed the mucus-covered spoon with forceps.

The man was only identified as “Mr. Zhang.”  Though the article didn’t mention his age, I’m sure he was barely old enough to be called “Mister.”  Why do I say this?  Because his behavior was only appropriate for a child, possibly an adolescent. You see, Mr. Zhang swallowed this spoon on a dare. One of his buddies dared him to do it. And once it became stuck, he wasn’t about to show weakness by seeking help to dislodge the spoon. So, he needlessly suffered with a spoon stuck in his throat for the next year.

When my father was a young man, he ate 22 hotdogs on a dare. He survived the ordeal. But what on earth did he gain out of it? Terrible indigestion? I’m sure he did. But did he prove how brave he was – or how foolish?

The next time someone dares you to do something, challenge them back. Ask yourself, “What will they do to prove that they’re not chicken-livered themselves? It’s easy to challenge others to do stupid stuff. What are they willing to do?

“And what authorizes them to be a judge of someone else’s courage? Who established them as a judge to impose on others their own ridiculous “acid test of courage”?

“And since they’re using peer pressure to manipulate you, isn’t the more courageous choice not to bow to their manipulation? Isn’t it braver to accept the criticism of others and blow off the dare?”

Don’t be manipulated by mere peer pressure to risk life, limb, and career by accepting someone’s dare. If you make yourself a slave to peer pressure there is virtually no end to the risky behavior others will challenge you to do. And they’ll always be more than happy to let you take all the risks while they laugh their behinds off.

If you want to please someone or find acceptance and approval from anyone, then choose God as that person.

God is your greatest fan. He truly loves you and only seeks your well-being. God finds no pleasure in your pain. And anything He asks you to do will only result in your being blessed. Consider the wise words of King Solomon.

“My son, if sinners entice you, turn your back on them! They may say, ‘Come and join us. Let’s hide and kill someone!  Just for fun, let’s ambush the innocent! … Think of the great things we’ll get! Come, throw in your lot with us; we’ll all share the loot.’

“My son, don’t go along with them! Stay far away from their paths. If a bird sees a trap being set, it knows to stay away. But these people set an ambush for themselves; they are trying to get themselves killed” (Proverbs 1:10-18).

Dear Father in heaven, I face this choice in life: To whom am I going to be enslaved?  Will I make myself dependent upon the approval and acceptance of my so-called friends?  Or, will I seek Your approval and acceptance?  Please help me, O God, to choose You. Give me the strength and courage to stand alone among my peers, to be different, and to disappoint them that I might please you. Amen. 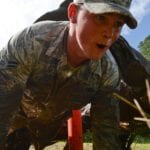 How Strong Is Your Foundation?

Who Are We Drawing Attention To?