The God of War - The Warrior's Journey®
Skip to content

The God of War

The God of War. Photo by Marines is licensed under CC By 2.0

The Old Testament contains accounts of one bloody war after another.

Christians are often troubled that God is at the center of many of the battles. Perhaps most disturbing of all is the practice of herem. Herem is a Hebrew word that is difficult to translate. Often it’s awkwardly translated as “things under the ban.” Though it’s hard to translate, herem‘s meaning for the native inhabitants of the land is clear: the entire enemy must be killed.

How are we to understand this in light of Jesus’ statement in Matthew 5:44, “But I say, love your enemies”? It is no wonder that people come to the conclusion that the Old Testament picture of God is closer to Osama Bin Laden than to Jesus Christ. But there is no disconnect here between the Testaments.

The God of the Old Testament is the same as the one we read about in the New. He is a God of love as well as a holy God who judges evil people. As we read from Genesis to Revelation, we see not a character change but an unfolding story of God’s great victory over sin, evil, and death. This takes place through mighty acts of justice—that is, again and again, acts of retributive judgment. Goodness and severity go together in this story.

The God of the Old Testament is the same as the one we read about in the New. He is a God of love as well as a holy God who judges evil people.

In the Old Testament, we read stories of conflict as God fights evil in the world. The first time God is called a warrior is in Exodus 15, where God rescues of his people from the oppressive Egyptians. Likewise, only because God fought for Israel is Joshua’s victory over the Canaanites possible, and the text makes it clear that the Canaanites must die—not to make room for the Israelites, but because of their sins. In this case, God makes his people his executioners.

Not all of God’s warring activity in the Old Testament, however, is directed toward Israel’s enemies. God also fights against Israel—the most notable instance being the conquest of Jerusalem by Nebuchadnezzar. (Lamentations 2:1-5)

The Old Testament ends with God’s people back in the land, but living under the dominance of a pagan nation. The last prophets of the Old Testament looked to the future for a return of the divine warrior who would come and destroy their enemies, bringing them back their freedom. (Daniel 7; Zechariah 14)

After a period of prophetic silence, the New Testament picks up the story. The first voice we hear is that of John the Baptist. He is clearly expecting a violent Messiah, the warrior from heaven who would defeat the Romans and punish disobedient Jewish people. (Matthew 3:7-12)

Having heard that Jesus is healing people, exorcising demons, and preaching the Good News, John thinks he may have mistakenly baptized the wrong person! (Matthew 11:1-19)

Of course, John did not err. Jesus is the divine warrior, the one whom the Old Testament expected, but he has heightened and intensified the battle. The goal of warfare is now elevated. The weapons for this war have changed. Jesus battles spiritual powers and authorities. He directs Peter to put away the sword because winning this battle involves dying rather than killing. (Matt. 26:50-56)

It is, however, a battle that began in the Old Testament. The military language used to describe Christ’s redemptive acts makes this clear. (Ephesians 4:7-13; Colossians 2:13-15)

But this is just the start of Christ’s work. Christ’s victory over Satan is definite but not finally realized. The Book of Revelation describes the return of Christ in the cloud chariot. He is riding a white horse and leading the armies of heaven. Here the final battle, which includes vultures eating dead bodies, is bloodier than anything in the Old Testament. This is a picture of the final judgment, of which the wars of the Old Testament are a foretaste and a warning. (Revelation 1:7; 19:11-21)

From Genesis to Revelation, God’s character remains consistent. He is a loving, powerful, holy judge, and warrior against evil from beginning to end. 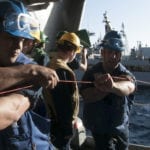 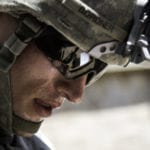