The Real You - The Warrior's Journey®
Skip to content

Bridge Over River Kwai. Photo by Commons Wikimedia is licensed under CC By 2.0

Have you ever seen the 1957 movie, Bridge Over the River Kwai? The movie stars William Holden as the cynical Navy Commander Shears, Alec Guinness as Lieutenant Colonel Nicholson, and Jack Hawkins as Major Warden. The story focuses on the plight of British POWs consigned to build a portion of the Burma-Siam Railroad during WWII, particularly their task to construct a bridge over the River Kwai.

Among the prisoners at the hellish POW camp is an American Navy commander, known only as Commander Shears. He and the newly arrived British battalion commander, Lt.Col. Nicholson–a “by the book” officer—begin to clash with each other. Shears decides to escape and miraculously succeeds in doing so. After a horrific journey, he makes it to a British Commando headquarters.

After nursing him back to health, the British Commandos try to persuade Shears to return with them back to the same prison camp – where captured British soldiers are now building a key railroad bridge. Their mission is to blow it up. The Commandos’ leader, Major Warden, reasons with him, “As an officer who’s just come from that area, you can provide us vital information.”

Shears balks at the suggestion. When the British major applies more pressure, Shears fesses up that he is not the person Major Ward thinks he is. His name isn’t Shears and he isn’t a Navy commander. He’s only a seaman second class, who was stranded on the same island as the real Commander Shears. When the real officer died, the phony put on his clothes and assumed his identity, hoping for better treatment from the enemy. It didn’t work. The Japanese had no respect for anyone who surrendered, regardless of his rank. And the British had little respect for him either, since he was so willing change his identity from an enlisted man to an officer and back again, simply to survive his circumstances.

You know, many people assume different identities whenever it’s advantageous to do so. We see this all the time with politicians. When traveling down south, they begin to eat pork rinds and put on a southern drawl. When they travel back to New York they drop the drawl and speak like a proper New Yorker. And when traveling abroad they scramble for some common ground, even fabricating stories of being “named after” one of the host nation’s celebrities. To the observer they appear as chameleons, changing colors and loyalties in order to advantage themselves—kind of like Commander Shears switching identities.

Years ago, when I was applying for Active Duty as an Army chaplain, the climate seemed very competitive. The time was just after the first Gulf War and the Army was resuming its “draw down” and was taking on a very “politically correct” posture. In those days chaplain candidates were being advised that, unless they were members of an ethnic minority, were female, or were part of a critically short faith group, the odds of being accessioned to Active Duty were slim. In those circumstances I began to see some fellow chaplain candidates, who had never before identified themselves with an ethnic minority begin to do so. Only God knows the motives of the heart. But it seemed as though they were assuming whichever identity gave them an advantage over other equally qualified candidates.

I once read that Karl Marx became disenchanted with religion, going on to consider it the “opiate of the masses,” largely because of his own father’s identity-switching. When his father realized he could climb the societal ladder if he became a Christian, he relinquished his Judaism for Christianity.

Then I read in the Bible of Moses. In the book of Hebrews the inspired writer declared, “By faith Moses, when he had grown up, refused to be called the son of Pharaoh’s daughter, choosing rather to endure ill-treatment with the people of God than to enjoy the passing pleasures of sin. He considered the reproach of Christ greater riches than the treasures of Egypt, for he was looking for a heavenly reward” (Hebrews 11:24-26).  Moses refused to use his “favored status” as a member of Pharaoh’s household to escape adversity with God’s people. He saw beyond this life’s short-sighted goals and rewards and focused instead on God’s eternal reward in heaven.

So what’s our true color?  How do we identify ourselves? Do we only ally ourselves with something when it personally benefits us? Are we loyal to a cause only when it earns us the applause of our popular culture or puts us at an advantage? When we are tried in the furnace of affliction or before God’s judgment seat, will the fire reveal us as pure silver or as worthless dross?

Dear Father in heaven, You alone search the hearts and minds of humanity. You alone understand the motives of the heart. Please, purify my heart and my motives. Even if it takes the furnace of affliction, cleanse me of all hypocrisy and sin and prepare me to stand before Your judgment seat. Amen. 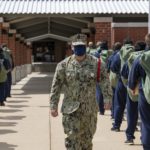 The Tale of Two Mountains