The Mountains Are Calling. Photo by U.S. Marines is licensed under CC By 2.0

Ever see a mother spoon-feed her baby? Sometimes mom can’t shovel the food fast enough into her baby’s mouth. With big, hungry babies, the child is likely to let out a scream or two in between spoonfuls. Other babies aren’t so easy to feed. Mom has to be more cunning and creative to sneak the spoon in between her darling’s rose petal lips.

But without dispute, the baby has the easier job. Simply opening his or her mouth requires little effort. Mom is doing all of the work–preparing the food, finding ways of getting it in the baby’s mouth, and cleaning up the mess afterward.

And when dad allows his young son to help him build or fix something, it’s generally assumed that dad is really doing all the work. In fact, it would be far easier for dad if he simply did the job alone. But he involves his son to let him share in the experience and to create some together-time with his boy. 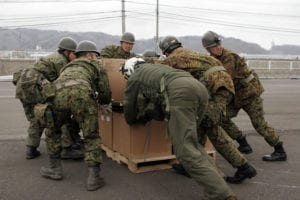 You know, often God involves us in his miraculous work. When someone shares the gospel, he or she is doing the easy part. It is God who does the miraculous—planting faith in the hearts of unbelievers, opening their blind eyes and raising them from death in trespasses and sins. What does the sinner do? He or she merely lets down their guard and opens up to receive Jesus.

Look at the miracles which Jesus performs in the Gospel of John. In nearly every case there is a mix of both divine and human involvement. God doesn’t need man’s involvement, but He chooses to include people in the equation. In each case, man does only what is humanly possible and God does what is humanly impossible.

Look, for instance, at the raising of Lazarus in John chapter eleven. Jesus told those mourners at the tomb to “remove the stone.” Now the stone was undeniably heavy. But, for a group of men, removing it from the mouth of the tomb was certainly within the sphere of human capability. Jesus then took care of the miraculous—raising Lazarus from death and corruption. Jesus further involved people in the miracle by telling them to remove the grave clothes from Lazarus, but that was easy. And Jesus took care of the impossible (John 11:38–44).

In the same way, Jesus told the servants at the wedding of Cana to fill the six stone waterpots with water and then take portions to the master of ceremonies. That was all within human capability. But Jesus performed the miraculous by turning the water into wine (John 2:1–11).

In the feeding of the multitude (John 6:10–14) Jesus again involved His disciples in the miracle. Jesus ordered the disciples to seat everyone in groups of fifty or more. Then He had them distribute the five loaves the two fish—which He multiplied into thousands. They did what was humanly possible. Christ did the miraculous.

Then in John chapter nine Jesus covered a blind man’s eyes with mud and told the man to wash it off in the Pool of Siloam. That was the easy part. When the man obeyed and washed the mud off, Christ restored his sight (John 9:1–7). Jesus involved the participation of the blind man, though He Himself performed the impossible.

And then there was the post-Resurrection appearance of Jesus in John chapter twenty-one. The disciples had gone fishing in their boats but had caught nothing. From the shore Jesus called to them and commanded them to cast their net on the right side of the boat. That was the easy part, which they did. Sending a huge catch of fish into their nets was the impossible task, which Jesus did (John 21:1–11). Of course, if the disciples hadn’t cast their net into the water I suspect the huge catch of fish wouldn’t have been caught. So God was adding human participation into the divine equation. Obviously human efforts would have fallen infinitely short of achieving the miraculous. Only God could accomplish that. Yet He involved the human element into these miracles.

Now, in any of these cases was the grace of God nullified because of human participation? Did a small measure of human action in Christ’s performance of the miracle violate God’s sovereignty? Absolutely not! Each miracle followed a simple and easy act of human obedience. Human effort accomplished nothing of the impossible. God simply involved human obedience in the performance of His miracles.

It’s the same with salvation. As mom only requires the baby to open his mouth, so God only requires us to open our hearts to receive Christ. This human involvement does not accomplish the miraculous nor does it nullify God’s grace. Jesus does all the heavy lifting, all the miraculous. He came to earth through the Incarnation (John 1:14). He bore our sins and the full fury of God’s wrath upon the cross to satisfy God’s holy justice (Romans 3:24–26). Jesus rose from the dead and ascended into heaven (Ephesians 4:9–10). And He ever lives to intercede for us (Romans 8:34; Hebrews 7:25; 1 John 2:2). He renews us day by day (2 Corinthians 4:16–17). And He will return to resurrect and glorify us in heaven (Philippians 3:20–21; 1 Thessalonians 4:13–18). All of this is beyond human capability. 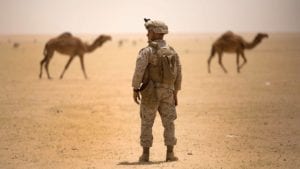 None of these things which we do can save us. They merely put us in a position by which we can receive from God His grace and salvation. It’s like the disciples simply lowering the net. It was Christ who filled it with fishes. We simply open our mouths and God Himself fills it (Psalm 81:10).

In article photos: Do You Know What Day It Is? by U.S. Marines licensed under CC BY-NC 2.0

Service members push a pallet of blankets out of a Marine CH-46E helicopter by U.S. Marines licensed under U.S. Gov Works 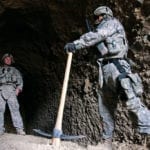 The Flow Which Cannot be Stopped 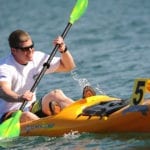