Living Life in a Panic - The Warrior's Journey®
Skip to content

Living Life in a Panic

Presidential Salute Battery. Photo by Army is licensed under CC By 2.0

Some who serve are unshakable.

Nothing seems to faze them. They take the toughest missions in stride, narrowly missing death time and again with no visible signs of distress; their only complaint might be over a cold cup of joe at the end of the day.  If only we could all remain so composed under pressure. It’s easy to become frustrated by events and situations beyond our control. If we are not careful, that frustration can give way to panic….

In 1862 John Randolph Bryan was the Confederacy’s premiere, and at one time only, balloonist. After a number of harrowing experiences, like being shot down by Union gunfire, he tried to resign. But his commander, General Joe Johnston, wouldn’t let him. But after a last frightful event, Captain Bryan gave up ballooning for good.

His last flight began well enough. Then everything went wrong. His balloon came untethered and drifted over enemy lines. Frantically, Captain Bryan tried to destroy all his notes, orders, and other incriminating evidence. But the balloon continued to drift and Bryan soon found himself heading for deep water. In a panic, Captain Bryan whipped off his clothing and prepared to swim for his life. But the balloon just kept drifting – until it landed right in the heart of a Confederate camp. What relief!

But his relief was short-lived. Having never before seen Captain Bryan or a balloon on the side of the Confederacy, the soldiers suspected he was a spy for the Union. And Captain Bryan had nothing with which to prove his identity or his allegiance. He was stripped down to his long johns and had discarded his orders, maps, notes, uniform and rank.  In desperation the poor captain fell to his knees and gave an impassioned plea for his life. The soldiers relented and Captain Bryan escaped with his life – though he was greatly humiliated by the experience.

The picture of Captain Bryan overreacting to each changing situation –over enemy lines, over water, then back over Confederate lines– resembles the way people tend to live their lives.  We spend our days in hurried anxiety. We see a small cloud on the horizon and prepare for a hurricane.

But God has an answer to our troubled souls:  “Come to me, all of you who are weary and carry heavy burdens, and I will give you rest. Take my yoke upon you. Let me teach you, because I am humble and gentle at heart, and you will find rest for your souls. For my yoke is easy to bear, and the burden I give you is light.” (Matthew 11:28-30, New Living Translation) We were never meant to walk alone, carry our burdens in our own strength, or survive life’s jungle by our own wits. We were created for fellowship with our Heavenly Father and to walk hand in hand with our Savior.

Dear Lord Jesus, to You I come for rest in my soul and relief from my burdens. Please speak peace to the storm that rages within me. Please empower me and make me equal to the challenges I face. And through it all, draw me nearer to You. Amen. 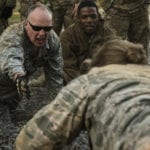