Parents of a Warrior - The Warrior's Journey®
Skip to content

We read of war many times in God’s word. War has been and always will be with us.

“And you will hear of wars and rumors of wars. See that you are not troubled.” Matthew 24:6 (NKJV)

For many people, war is in some “far away” place that has no effect on their lives unless they have a loved one serving as a warrior.

For many years, our son was gainfully employed as a carpenter, salesman, truck driver, and many other occupations; pretty safe stuff, we assumed. When he announced at the age of 30 that he was going to pursue a career as a Deputy United States Marshal, our hearts skipped a beat. We could not understand why he would put himself in harm’s way. He would serve federal warrants, transport many hardened criminals, guard federal judges, and perform other dangerous duties. We got accustomed to praying daily for him. I must admit our prayer life increased in correlation to the danger he faced. Many times he confronted situations that we’re not aware of because he was not authorized to release information as to what he was doing. An unfortunate on-duty accident eventually forced him to retire. We were all devastated and unable to fathom what the outcome would be.

He completely immersed himself into evangelism, holding revivals, working on-site during the Katrina disaster on the Gulf shores, providing Critical Stress Intervention to the students after the Virginia Tech massacre, and ministering in churches around the United States. During this time, he trained himself in anti-terrorism tactics which increased his physical condition far beyond that of an average 40-year-old man.

Additionally, he applied for and was accepted into an organization that only employed former Navy SEALs, Army Rangers, Special Forces, and other types of law enforcement personnel, and worked on assignment with a company contracted to the military. His continued service to our Lord was beyond reproach as he continued to work hard and later became an appointed chaplain. Finally, he was sent to Afghanistan to perform his assigned duties as a contractor to his peers and many U.S. servicemembers that passed his way. Needless to say, he was on very dangerous soil and had to depend on God to faithfully protect him as he fulfilled his duties to the company and his commitment to the Lord. 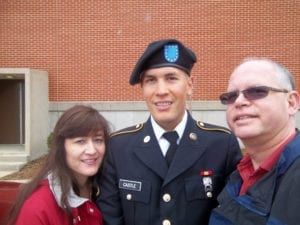 As a parent, I was very confused. I had such a mixture of feelings. There was pride in my son but increasing dependence on the Lord. It was hard to pray objectively. I wanted him to come home unscathed, but also wanted God’s will in his life. I must confess, I had tried many times to pray him into a “safe work environment.” Then it hit me, the commitment we had made over 55 years ago,

Why was I so quick to abandon this commitment we made as parents? Serving the Lord also included handing over our family to Him. I had to accept God’s plan for our son.

This is how we raised our family, why should I change it now? At the same time, during a fleeting moment of parental despair, I thought maybe I was in the right and it was God who was not fair. He was expecting too much from me. Three children, five grandchildren, and three great-grandchildren later, God was still testing me. In my son’s life, bullets were flying dangerously close, bombs were exploding everywhere, treasured buddies were being injured and killed, and constant attack was the venue of the day for almost two years in a foreign, desolate country.

Be firm in your faith and strong in your dedication and personal commitment.

Faith is a strong word! Think of the lives of Shadrach, Meshach, and Abed-Nego and recall their faith; Daniel 3:17 states,

We read in Joshua during the Israelites’ God-directed command to conquer Jericho that God had called out 40,000 warriors, armed for battle, to cross over the Jordan River to the plains of Jericho (Joshua 4:13). They listen, obeyed, and marched to His orders. Then it hit me. The realization came to me that my son is related to me in three ways:

I had to separate these three very distinct roles and pray accordingly. After much thought, I decided not to question God’s direction for my son’s life.

While I still trusted God for his safety, I had to act and earnestly pray. Our friends, family, and members from churches around the country were praying fervently, bombarding God’s throne with many tears on our son’s behalf.

A very prevalent fact remained with me. I felt personally I had to be faithful in prayer, regardless of his plight in the war-torn area.

I had no choice, I had to turn his safety and well-being over to the Lord. Therefore, this approach to God’s direction got me through my son’s first deployment to Afghanistan. When he came home, I relaxed a little. No longer would he be subject to the rules of war, in a land where the enemy did not care whether they lived or died. After three months of R&R and safety of home and loved ones, he announced he was going back into the area of conflict. I again resorted to intense praying for my son.

It was hard for me to understand. At first, he was gone three months, came home, and then returned for another seven months, missing birthdays, Thanksgiving Day, wedding anniversaries, and the Christmas holiday season. I again wondered, what was the purpose of this war and why did he have to go back? My son (the Evangelist) was blessed while serving his country. My son (the Warrior) influenced many weary fighting soldiers. The soldiers were a hard-core group of men by his side day and night. They included Muslim interpreters and many others in weekly church services. Yes, inside Afghanistan!

He directed communion services and had an effective style of personal evangelism to people who would never seek God’s will if not for these hostile situations. His CISM training helped him to counsel many of those hardened battle-weary warriors to deal with their own near-death experiences, devastating situations at home, and suicides of their best friends. He was in God’s place, at God’s time.

As he returned yet a third term, I cried to myself, “God, this is the straw that is going to break the camel’s back! I don’t know if I can go through this again.” That moment the word of the Lord was direct and very challenging to me. His word to me was, “Did you know that my son asked to be relieved of his appointment on the cross three times?” (Matthew 26:39–43). The cross was the divine plan. Jesus willingly gave his life as a sacrifice for sin. I then understood that my son was in God’s will. God’s word was given to me in a sense of love, but also a challenge. “Okay,” I replied to God. “Here we go again, I will do my best.”

Parents, this is my challenge to you: support your warrior. Express your love and pray for them constantly. Be firm in your faith and strong in your dedication and personal commitment. God will never forsake you! Do not forsake your warrior. 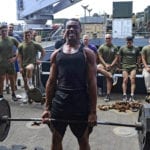 When Life is a Continual Struggle 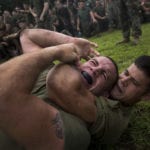