The Chaplain Corps Anniversary - The Warrior's Journey®
Skip to content

Chaplain reads eulogy at burial at sea. Photo by US Navy is licensed under CC By 2.0

In two days, 243 years ago (July 29, 1775), the Continental Congress authorized the establishment of a Chaplains Corps to provide divine worship for members of our Armed Forces.

Over time the Chaplains Corps has undergone quite a few changes. For instance, during the American Revolution, Chaplains carried weapons and fought alongside their fellow Soldiers. 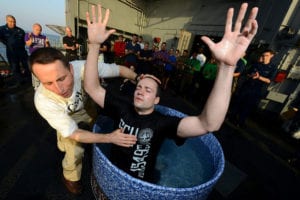 Now, that practice has long since been abandoned. In fact, the Geneva Conventions (Protocol I, 8 June 1977, Art 43.2) require that all military chaplains be complete non-combatants. U.S. military Chaplains cannot so much as pick up a weapon without getting themselves in hot water.

Over the years the Military and our Nation have learned to value Chaplains. But, not for firing bullets but for connecting Soldiers, Sailors, Airmen, and Marines to God. They’re valued for providing inspiration and hope in desperate times, for being the lone voice of compassion in a hostile work environment, for being a safe and approachable source of help, and for providing a perspective on life (an eternal one) that can only emanate from a Chaplain’s personal relationship with the Almighty. Historically, those are the things for which Chaplains have been valued.

Any cursory review history’s most beloved Chaplains will include the names of Father Francis Duffy of the “Fighting 69th” Infantry Regiment, Father Emil Kapaun—who perished in a North Korean POW camp while serving his fellow Soldiers, and the “Four Immortal Chaplains”—Chaplain (1LT) George Fox (Methodist), Chaplain (1LT) Alexander Goode (Jewish), Chaplain (1LT) John Washington (Roman Catholic), and Chaplain (1LT) Clark Poling (Reformed)—who gave away their coats, gloves, and life vests in order to save others–and then chose to go down with their torpedoed transport so they could pray with and inspire those who could not escape. Many more names can be mentioned—nearly 300–who made the ultimate sacrifice to serve both God and country.

But what is strangely absent from this list are those Chaplains who did well professionally. Almost all of the best remembered and most beloved Chaplains never made it past the rank of captain (O-3).

The “Immortal Chaplains” never made it past 1LT (O-2). One notable chaplain, Philip Hannan, served in the 82nd Airborne Division for the duration of WWII. Yet he left the Army in the rank of 1LT. Did that make him a failure? If promotion equates to success, then obviously, yes. But it should be noted that he went on to become an Archbishop in the Roman Catholic Church, serving his community well into his nineties. 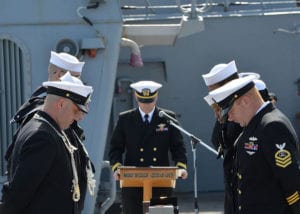 Certainly, throughout its 240-year history, thousands of high-ranking/professionally successful Chaplains have come and gone. Sadly, few, if any, are remembered or missed. For Chaplains are not valued for any professional success and rank they achieve, or for their operational contributions on the battlefield.

They are valued as servants of God and friends to Soldiers.

As a result, it makes one wonder if Chaplains should, therefore, be less concerned about selection boards and staying professionally competitive, and be more devoted to the God who called them and the Soldiers for whom they exist.

The apostle, St. Paul, declared, “So we make it our goal to please him, whether we are at home in the body or away from it. For we must all appear before the judgment seat of Christ, so that each of us may receive what is due us for the things done while in the body, whether good or bad,” (2 Corinthians 5:9–10, New International Version).

Dear Father in heaven, please help me to sharpen my focus on the pursuits and goals that have lasting and eternal significance. Amen. 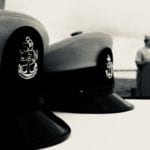 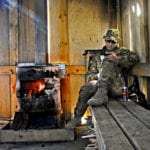 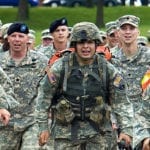