My Brother’s Journey Home - The Warrior's Journey®
Skip to content

Tied Up. Photo by Air Force is licensed under CC By 2.0

I hope my brother’s story will encourage you and help you along your journey.

My younger brother served twenty years with the Air Force. He worked as a Medical Technician which involved many different types of work. He traveled extensively and was stationed in various places during his years of service. Because of this, our family did not see him very much. He did tours of service in hard places such as Iraq, Kuwait, and other Middle Eastern countries. He saw his fair share of death and injury. Needless to say, it took its toll on my brother. He turned to alcohol to numb the pain of his troubled mind and spirit. He was a very smart man, well versed with history, and stayed informed with current events going on here in our country. 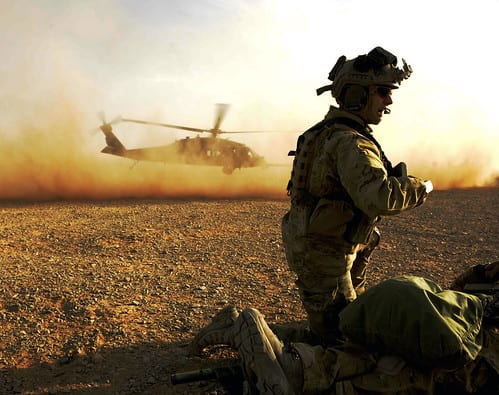 Over the years, I had the opportunity to share with him my faith in Jesus Christ. I hoped that he would understand freedom from his torments and anger could only be found in Christ. My older brother is also a Christian and shared the same truth with him. We spent years praying for our younger brother asking God to save him and set him free from his torturous memories.

After he retired, he found life slowing down a bit which gave him time to think about his life. He missed so much of what had happened with us and our families. In the last year of his life, he was diagnosed with a major heart ailment and cirrhosis of the liver from his years of heavy drinking. He was dying and he knew it. He desperately tried to make up for lost time and found himself wanting to be around his family. He had a failed marriage and no children of his own. He moved back to where we grew up and worked to remodel a house down the street from our childhood home. Our mother was also dying of cancer. I tell people that it was literally a race to the grave. This troubled him because he and mom had some unresolved differences.

Time was running out for my brother and eternity was waiting for him. He was scared by what that meant and tortured by so many different things. However, God the Father is merciful and offers us opportunities to hear truth in ways that set us free. God gave my brother and me a beautiful gift; one more time together at the kitchen table of the home where we grew up. I knew this was the last time I would see my brother alive. What follows is the message I gave him, and the one I hope you will believe, just as he did.

As we sat together at the kitchen table, I saw a man deeply troubled and scared. I shared, once again, what it meant to be Christian. At one point, he became irritated with me and screamed, “I am trying, I am trying to believe, but I just can’t! I don’t know how to.” I desperately tried to give him the message in a different way, but couldn’t come up with anything.

All of a sudden, I heard the Holy Spirit of God whisper to me, “show him Calvary.”

I immediately knew what that meant and shared the story of Jesus’ crucifixion in a way that would leave him with a choice that each of us have to make. Dear friend, I hope this helps you like it helped him to understand the amazing grace and love of God.

Sin and death were defeated by Christ on the cross all we have to do is believe.

“Little brother, I am going to make this as simple as I can. Let’s take a look at Calvary, where we find Jesus and two criminals sentenced to death. You have Jesus in the middle and a criminal on each side of him. The religious leaders, the soldiers, and the criminals were mocking Jesus saying that if he was the son of God to come off the cross and save himself. The criminals, who were dying that day, wanted him to prove himself and save them from certain death.

Then Jesus prayed to the Father to ‘forgive them for they do not know what they are doing.’ This is the most powerful picture of what it means to forgive your enemies. Then all of a sudden one of the criminals hears this amazing request to forgive and has a change of heart. I think he was amazed at how someone could do such a thing towards his executioners. He yelled across to his fellow criminal telling him to be quiet. In the gospel of Luke 23:40-41 we read it this way. ‘But the other criminal rebuked him. “Don’t you fear God,” he said, “since you are under the same sentence? We are punished justly, for we are getting what our deeds deserve. But this man has done nothing wrong.”‘

That man turned to Jesus and simply asked to be remembered. He didn’t expect anything, but Jesus gives him far more than what he asked for. Jesus said to him, ‘Truly I tell you, today you will be with me in paradise.’ Now, little brother, I want you to think with me for a minute. This criminal could not do anything good or religious. He could not be baptized, he could not go to church, and he could not help the poor, or do any good work. He was about to die and all he could do he did, he admitted his guilt and simply asked to be remembered. That is what it means to repent. Jesus took your sin, my sin and sins of the world upon himself. When Jesus cried out from the cross, ‘it is finished’ all that had to be accomplished was finished. Sin and death were defeated by Christ on the cross all we have to do is believe.”

Then I asked him this, “So little brother, which criminal are you? And we both know which one you are, don’t we?”

Jesus made it possible for everyone to have peace.

I asked if I could pray for him because my ride to the airport arrived and I had to leave. I prayed in the name of Jesus that the demonic voices would be quiet and the only voice he would hear would be the voice of the savior. I prayed that he would find peace from his troubled thoughts and turn to Jesus. As we were leaving our mother’s home, he had a smile on his face and said this: “When I decide what to do, will you baptize me?”

In that moment, I knew that God would save my brother before he left this life. Then, my brother blessed me by saying this as I was leaving. “Bro, you have to come home after you graduate seminary and pastor a church here because others need to hear what you just shared with me.” I told him thanks and that I was not sure what God had next, but I would love for that to happen. We hugged each other and I left for the airport. It was the last time I saw my brother alive. However, his story does not end there.

While I was home on that visit, my brother had a chance to meet my pastor and mentor. He really enjoyed talking with him. I asked my brother if he would be interested in meeting with him again and he said yes. Little did I know that this meeting would take place in my brother’s hospital room. I received a phone call that my brother was dying and would be released into hospice, so I called my pastor and asked him to try and get to my brother one more time.

Which criminal are you?

He made time that day and it just so happened that no one else was around when he arrived. My brother was anxious and scared. My pastor said my brother had grabbed his hand to shake. He had never felt a grip like that from a dying man. He shared the gospel one more time with my brother and asked if he wanted to receive Jesus as his Lord and Savior. My brother said yes, and they prayed. After the prayer, the grip he had on my pastor released in such a way he thought my brother had died. He called out to him and asked if he was okay? My brother said, “Yes pastor, I am okay. I’ve just never felt a peace like this before.” He was at peace with God and a week later he slipped into eternity.

Let me close with the question I asked my brother: Friend, which criminal are you? Are you angry with God? Are you, like my brother, having a hard time dealing with what life has brought you? Let me encourage you to be the one who turns to Jesus and asks to be remembered. Ask Him to forgive you and help you on your journey to life everlasting with Him. I have no idea what your journey has been, but I know the One who does. Jesus made it possible for everyone to have peace.

One of my favorite passages of scripture is found in John 16:33 (NKJV):
“These things I have spoken to you, that in Me you may have peace. In the world you will have tribulation; but be of good cheer, I have overcome the world.”

Warrior, I pray in Jesus name that you receive His peace! 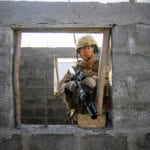 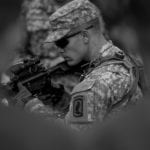