Leading by Example - The Warrior's Journey®
Skip to content

We desperately need godly leaders at all levels, especially in the home. Using modern jargon, many families in the United States are ‘jacked up.’ They’re disjointed, dysfunctional, and falling apart. God, our Heavenly Commander, ordained marriage and family to be the basic building blocks of society. He has provided the means to have godly, functional families. The problem? In many cases, we just haven’t obeyed. Can we turn this around? Absolutely! But it will take leadership by example, faith expressed through obedience, and plain hard work.

“He committed all the sins his father had done before him; his heart was not fully devoted to the Lord his God, as the heart of David his forefather had been” (1 Kings 15:3, NKJV).

This verse refers to Abijah, king of Judah, who failed as a leader in his family and on the job. But note the phrase “as his father had done.” His dad was Rehoboam. The Bible tells us that under the reign of Rehoboam, “Judah did evil in the eyes of the Lord” (1 Kings 14:22). Leadership is key — leadership by example. You may be a good leader in your unit or organization, but how is your leadership on the home front? 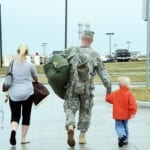 Obedience for Your Own Good

A Cross With Many Splinters 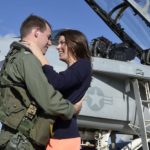