Remember Those Who Are Riding With You

The UPI published the story of a bus driver in the UK who made an unsuccessful attempt to pass under a low bridge. He may have forgotten that he was driving a double-decker. For, although he believed he had enough clearance, the bottom of the bridge tore the top of the bus off – the entire upper deck. Fortunately, in this accident no one was occupying the upper deck and there were no injuries to the passengers below. But can you see the potential for catastrophe? 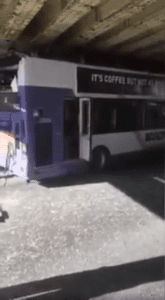 Until I read this, it never occurred to me that something like this could even happen. I used to live in Lacey, WA, where (on Mullins Road) there’s a low-clearance railroad bridge. And, on my journeys, I’ve seen many trucks which have had their tops peeled right off or wedged beneath the bridge. The driver sitting in the cab can easily forget that there’s more to his vehicle than his immediate surroundings indicate. The damage to his truck was regrettable. But what if he was driving a double-decker bus with many passengers riding above him? The thought is horrifying. The driver of such a bus must constantly keep in mind how others will be affected by his carelessness.

When I read this story it brought to mind a number of people I’ve known. It made me think of leaders in the military who had broken the law or otherwise disgraced themselves. It’s a terrifying thing to be under investigation in the military or to be in legal trouble. There are many offenses in the military that will get you imprisoned and dishonorably discharged. Yet, in the civilian world, those same offenses do not even constitute a misdemeanor.

So when an NCO or Officer breaks the rules the punishment can be quite severe. What makes the punishment most painful is that the servicemember’s family will inevitably suffer right along with him. The servicemember may very likely lose all pay and benefits – benefits upon which his family depended. If the family lives in on-base housing, their home will be taken from them as well. If it never occurred to the servicemember before he broke the law, it becomes painfully apparent afterward. He’s dragged those he loves into his own trouble. He’s like the bus driver who forgot he had an upper deck when he tried to make it under the bridge.

Every parent needs to take this to heart. As a parent your actions – your infidelity, your desire to end the marriage, or your desire to wreak revenge on your spouse will certainly bring harm upon your children. You will be like a bus driver, who in his desire to squeeze under the bridge has lost sight of his passengers riding above him. Your children will suffer and your actions destroy their world.

One of the saddest stories in the Bible is that of a man called Achan, recorded in the book of Joshua (Joshua 7). During the battle of Jericho, the Israelites were forbidden from taking any spoils from the fallen city. Achan was one of the soldiers who participated in this battle. When the city walls tumbled down and the Israelites entered Jericho, Achan caught sight of some valuable treasures in one its homes. Perhaps it was simple greed or maybe he thought the prize would greatly enrich his family. Whatever the reason, he took the forbidden valuables and hid them under his tent.

But there was no escape from God’s watchful eye. And God refused to give Israel any further victories until Achan’s sin was uncovered and punished. An investigation eliminated every possible suspect, all except Achan. Tragically, not only would Achan be punished for this crime, but so would his entire family. Sounds like the military, doesn’t it. And as his wife and children clung to Achan in the moments before they died, what feelings of regret and remorse must have filled his heart. “How could I have brought this misery upon those I love?”

So be mindful of those who are riding with you and keep your behavior and actions above reproach. Whatever you do – whether good or bad – will certainly affect those you love.

Dear Father in heaven, please keep my eyes wide open to the dangers I’ll expose my family to by my bad behavior. Don’t let me lapse into a fantasy world and believe that I can live free of consequences. Alert me to the outcome of my actions, so that I may bless my family and not curse them. Amen. 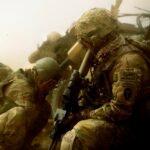 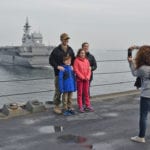 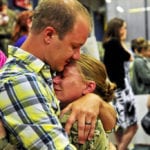