Hanging out with my niece and nephew is awesome. It’s eye opening, energizing and taxing physically because of their youth and vibrant imagination! One minute we are talking about the value of telling the truth, the next about farts, doing the Dab, and dancing to Crazy Frog or Michael Jackson’s “Bad” on YouTube.

It’s been a busy year, I became a dad, completed a ship deployment, and began a challenging new assignment. So having their parents & them visit this summer from Minnesota has been special sharing new aspects of our life and brought a nice change of pace. Sometimes it’s a little tough to shift gears between work, being a husband, dad or host, but I wouldn’t miss it to see them.

Their first 4 days I spent away at San Clemente Island for training, so when I came back I knew it was Uncle Time!

That next afternoon I took them to Dairy Queen. On the way home, tummies full of Oreo, M&M & Reese’s Blizzard, we stopped at a big local GasMart called the NEX.

I gave them each $2 and said that this was their budget to find something they liked. E., my nephew, quickly settled on a candy Pushpop but wanted to double-check the cost. I said, “It’s $2”, he corrected me, “Actually it’s $1.93, Uncle Kristian.”

M., my niece, wanted to spend her $2 on a couple poster boards to help advertise a lemonade stand. We proceeded to the register for the big purchases.

E. must have taken three minutes to pay using at least 18 pennies and assorted coins. The patient cashier with respectful diligence counted and stacked them and gave him his Pushpop. Carrying the candy and big posterboards we walked out of the NEX. 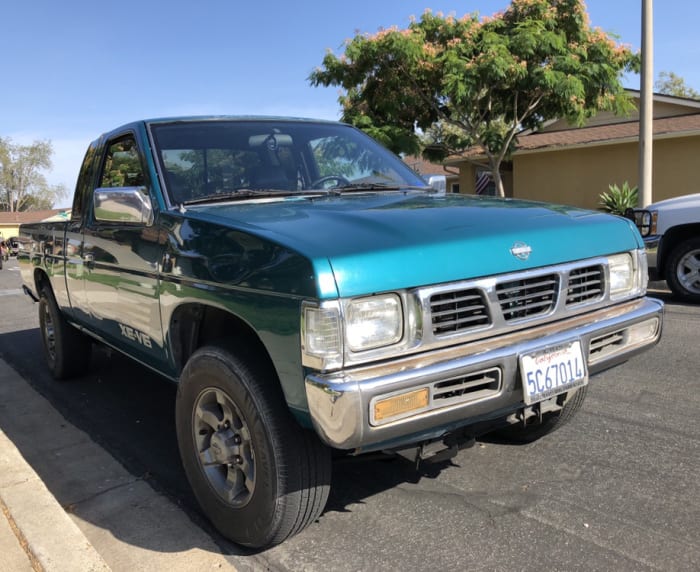 Let me be honest. E. & M. had been enthusiastically talking about this stand for what seemed hours. E. wanted to offer free rides in my ’95 Nissan Pickup as an attraction. He had helped me wash it, prepping it for sale the day before.

He was sure that rides would bring in the kids.

M. was more concerned about offering multiple flavors, like pink lemonade, and using fresh squeezed lemons and real sugar. She suggested we sell it for 10 cents. 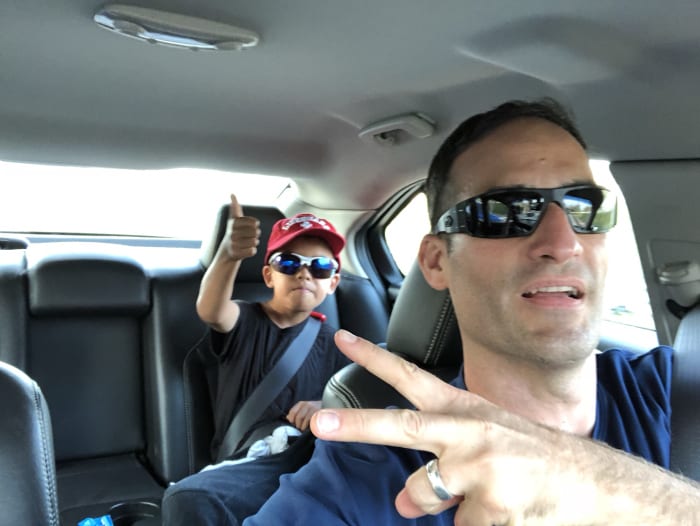 You know sometimes you don’t realize you are getting old and too logical, but this happened to me during the lemonade stand planning cell meeting we had there riding around in my Red Ford Taurus.

I told M. that she had to sell cups for at least a quarter. After all real lemons would be involved!

In my heart I was just playmaking and thought,

They don’t even live in this neighborhood, and we don’t know the neighbors well, who will come?

My logic carried on, maybe this will happen in 3 or 4 days when I have a weekend…but probably the idea will fizzle out.

I asked them, “what’s pink Lemonade made from?”

Then I thought of the girl three houses down who already had a monopoly on the lemonade market. (I think she sometimes used a megaphone and coercion that the Marines would get you if you didn’t make a purchase.) No, we can’t compete with her, things could get ugly.

Fast Forward. That next morning I put on my boots and Type 3 working uniform, and noticed an unusual quiet emanating from our back patio. Yes silence has a sound all its own to a parent!

And there were M. & E. working, they had mostly knocked out their initial promotion poster boards…and they looked good!!

I confess I still wasn’t a believer. Leaving to work, I gave them a hug and some cheap but well-meant words like, “Wow, great poster boards, so much detail and excellent marketing too.”

I came home that afternoon to a surprising scene. 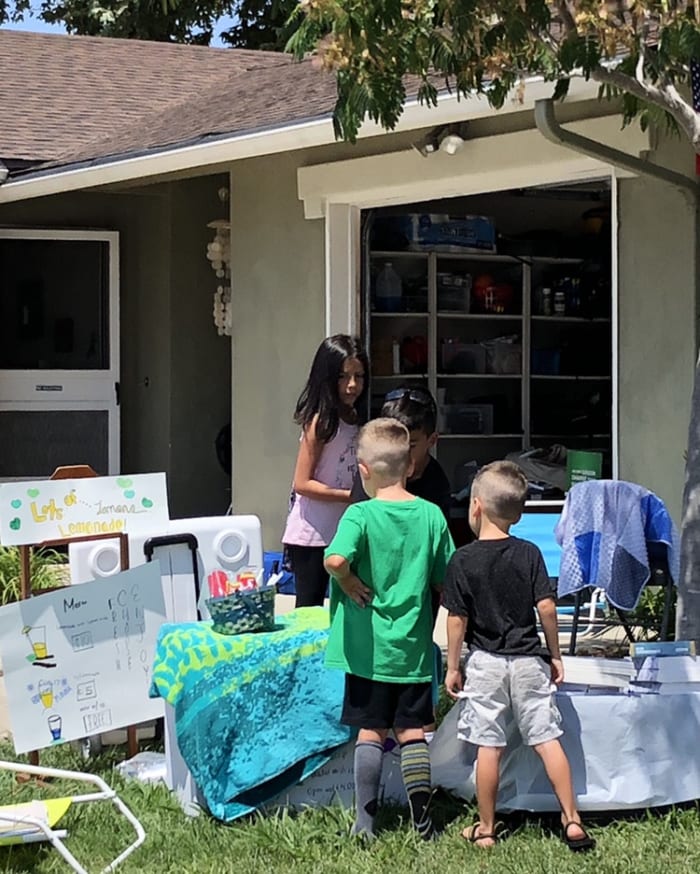 There they were, with customers!! Rocking that lemonade stand.

I rolled my window down.

“I’d like one! Looks delicious!” I wanted to act like a stranger to add to the vibe of excited customers.

“Can you make change?” Handing my niece a $5 dollar bill. She said “Sure!” and went right for the petty cash jar that was formerly our coin savings bank, once located on the Kitchen Counter. 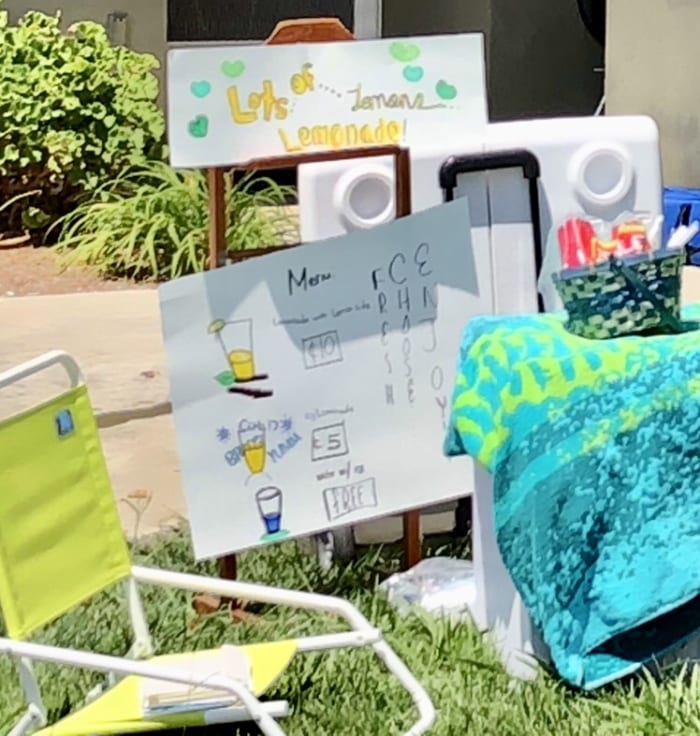 Man!! They had held out on me regarding their marketing strategy. It was so hot in San Diego. What a stroke of genius.

Then my nephew said to me and to the boys gathered. “Hey, do you want a Bible? They’re really cool!” 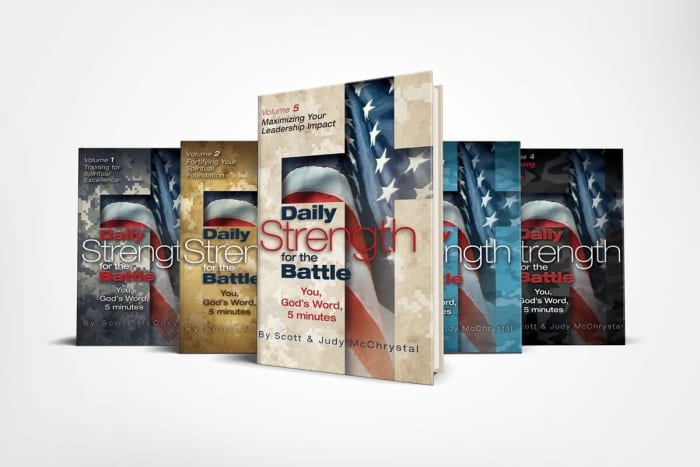 What? Giving out Bibles? E. had literally raided this Chaplain’s garage and taken out my “Daily Strength for The Battle” Devotionals by Chaplain Scott McChrystal and was sending handfuls of them away to kids and families who stopped by.

Umm, yes he’d skipped asking permission to give out these little books (written to shore up military families with stories and truth from God’s Word) but I don’t blame him. Should we ask permission to give away a Bible book not being used?

As my vignette here comes to a close, I must say that I got into what they were doing that afternoon! I felt like Robin Williams back in Neverland, almost like a young Peter Pan, who’d learned to fly again. It was invigorating and fresh to my Spirit.

How had they pulled it off? It was ice cold with a tart and a zing! It had the right balance of sugar, yummy and sweet. They had brand new plastic cups–where had those come from?

And the stand of books were all laid out in neat rows.

I want to make an observation, M. & E. did more outreach to my military housing unit in 2 hours than we’d done in 3 years! My eye had been on my shipmates back onboard the Cruiser; my heart focused on my wife, a new mother, and our sweet joy, little Isak.

But where I saw inadequate planning and resources, not enough time, not a large enough market–this 7 & 9 year old duo saw fun, opportunity and a whimsical “what-if-wouldn’t-that-be-so-cool” childlike kind of dream to bring to life no matter what!

They met tons of kids in those two hours. They made good money. People gave way more than 10 cents. One guy handed a $5 and said “Keep it!”

He got it. I on the other hand didn’t really until it was done.

They shared and showed Jesus’ love so naturally.

My devotional time with the Lord has been a little scarce as a new dad. So I guess, knowing that, He mercifully threw in some lessons from the Lemonade Stand to help me along. Here they are.

“Love your Neighbor”, is part of the greatest command from Jesus. And I need to do it. Like E. & M did to our whole neighborhood that afternoon.

“Out of the mouths of infants You have ordained praise.” Forgive me Lord for missing Your hand moving through these children. You are awesome and bigger than my adult-minded limitations. Give me “Faith Like a Child.” And may I always give a seat at the planning table, or a microphone, to children to help lead us on mission (trips) and in worship.

Bibles are cool. They are God’s Word. And without shame E. gave them out. Wow. I want to be like that.

“He will give you the desires of your heart.”

May I be more tuned to the Holy Spirit when he puts zany ideas in my son Isak’s mind (or in my wife’s heart or mine), not crushing them with self-protecting cold hard logic…let me dream a little and tread carefully on what could soon become Holy Ground trimmed out with a Lemonade Stand.

*I want to dedicate this story to Romina, M. & E.’s mom. She was the force that God’s Spirit used to bring dreams to life. 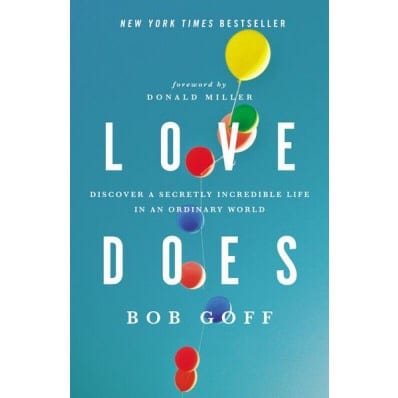 **If you enjoyed this reflection check out Bob Goff’s book “Love Does”. A mentor, pastor Sean Wiles, recommended it. It’s about whimsical, Holy Spirit-led, unlikely and amazing happenings in his life worth hearing. 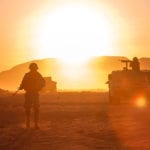 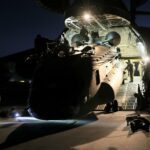 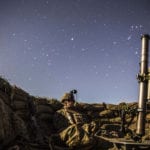