Sparky. Photo by The U.S. Marines is licensed under CC By 2.0

Automaker Henry Ford asked electrical engineer genius Charlie Steinmetz to build the generators for his factory. One day the generators ground to a halt, and Ford’s repairmen couldn’t find the problem. In desperation, Ford called Steinmetz, who climbed up the generator and marked the spot with chalk. The repairmen were then told to remove that plate and fix the parts behind it. A few days later Ford was shocked to receive a bill from Steinmetz for $10,000.00. Flabbergasted, the tightfisted car maker demanded to know why the bill was so high. He insisted that Steinmetz itemize the bill so he could see exactly what he was paying for.

Steinmetz sent his reply: $1.00 for marking the generator with chalk. $9,999.00 for knowing where to tinker. Ford paid the bill. Knowing what to do in the time of desperation and crisis is what made the cost worth it.

In the same way, knowing how to survive in the desperate times of combat will make all the endless hours of training worth it. The tough training gives servicemembers the critical edge they need in the ultimate game in which only the winners survive.

But what about our spiritual training? General George C. Marshall once wrote:

“The soldier’s heart, the soldier’s spirit, and the soldier’s soul are everything. Unless the soldier’s soul sustains him, he cannot be relied on and will fail himself, his commander, and his country in the end. It is not enough to fight. It is the spirit which we bring to the fight that decides the issue… With it all things are possible, without it everything else, planning, preparation, and production, count for nothing.”

“It’s morale – and I mean spiritual morale – which ultimately wins the victory; and that type of morale can only come out of the righteous nature of a soldier who knows God and who has the spirit of religious fervor in his soul. I count heavily on that type of man and that type of Army.”

Are we trained to survive in combat? Do we also have the spiritual edge that can help us in crisis and the desperate times of combat? God help us to strengthen and under-gird our spirits through prayer, worship and the reading of Scripture. This is so that we may have the spirit and heart to survive the troublesome times to come. The Scripture tells us: “Put on the full armor of God, that you may be able to stand firm against the schemes of the devil. For our struggle is not against flesh and blood, but against … the spiritual forces of wickedness” (Ephesians 6:11-12).

Dear Father in heaven, help me to strengthen and fortify my faith and spirit that I may be able to survive the trials of life and rigors of combat. Amen. 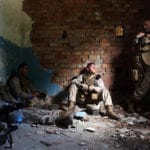 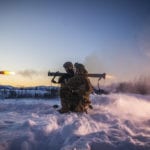