Ice blankets Fort Campbell. Photo by The U.S. Army is licensed under CC By 2.0

In the award-winning Weather Channel television series, Storm Stories, the violent and catastrophic weather events of hurricanes and tornados take center stage. Typically featured are hurricanes that spread over hundreds of miles and inflict multiple billions of dollars in damage and F5 tornados that clock winds of over 300 miles per hour and rage with devastating power.

Yet one episode of this series highlights a weather event that was neither violent nor raging. It occurred in Montreal, Quebec, January 1998 – an event that at first appeared very beautiful, but then turned both devastating and deadly. In fact, it became the most costly natural disaster (in property damage and loss of life) that Canada ever experienced. What was it? An ice storm.

At first, the slow drizzle of freezing rain turned Montreal and the surrounding region into a postcard-like wonderland. But the freezing rain fell continuously for four days – coating trees and power lines with a four-inch layer of ice. The result was catastrophic. Hundreds of miles of power lines were downed by the weight of the ice. All over the city telephone poles snapped in half, trees were bent or broken to the ground, and thousands of homes lost power for more than a month in the frigid temperatures. More than 20 persons died and thousands were hospitalized from storm related injuries.

Not all of life’s dangers are as obvious as a raging storm. Some come very subtly, appear inviting at first, and then weigh us down and break us.

In His parable of the sower and the seed (Matthew 13:1-23), Jesus warned that sometimes the threat to our souls is not always from the obvious work of Satan. He also warned that we can be weighed down and choked by the worries of this world, the deceitfulness of riches, and the desires for other things. Perhaps the gradual forms of devastation are the most dangerous.

Our Father Who art in heaven, hallowed be Thy name. Thy kingdom come; Thy will be done on earth as it is in heaven. Give us this day our daily bread. And forgive us our trespasses as we forgive those who’ve trespassed against us. And lead us not into temptation, but deliver us from evil. For Thine is the kingdom, and the power, and the glory forever. Amen. 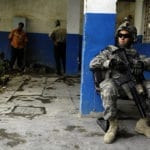 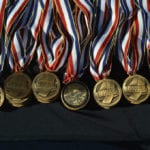 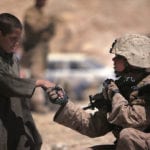