When They're Not the Same - The Warrior's Journey®
Skip to content

When They’re Not the Same

Death is not the only way to lose a parent. Perhaps you know this from your own experience.

Your mom or dad has returned from deployment and you know you should be ecstatic and overwhelmingly happy; but what you feel is quite different because who they are is quite different too. Maybe they talk less and sleep all day, or perhaps they get angry at things they used to find amusing. Do you remember how they were before? Or is this intimidating stranger just not matching up with all the stories you heard and the few images you played over and over in your head while they were gone.

Whatever your unique story is, the fact that is shoved in your face every day is—they are just not the same! So how do you deal with it? How do you interact with them and the rest of your family in a healthy and loving way? How to you maintain resilience?  What do you do to remember each day that the Lord loves you and will guide you? More than that, God will show you how to communicate his love to those around you, rather than frustration, anger, fear, or indifference. So how? Keep reading!

Note: Normally we share a personal story or a familiar one from movies or books to start off the online personal journey, but this time, we want you to think about your own story. Because what you are going through at home right now is a difficult and unique situation, it seemed right that we give you some practical resources as well as a “bigger scoop” of Scripture. As you read the advice in this section, take time to slowly piece it together with what you are going through right now, and use the Bible passages provided as your first step to regularly immerse yourself in God’s word.

There are a lot of things that a military member can experience that will change who they are, make them return home a different person. Maybe it’s something your whole family knows about like an injury or diagnosed PTSD. Perhaps it’s unspoken and you simply feel it hanging over your home, a tension and unease that makes every interaction a potential explosion. It can be especially challenging to handle if the people involved won’t acknowledge and deal with the issue.

Where does that leave you? You’re just a kid who doesn’t get much say in things. You certainly can’t walk up to your parent and say, “you need help, go talk to a professional!” The whole thing probably makes you feel small, powerless, and insignificant. But that’s not the truth. There are things you can do and some are very important! Probably the two things to focus on first are immersing yourself in Scripture to experience fully God’s love for you, and educating yourself about the warning signs and help available to military personnel and their families. 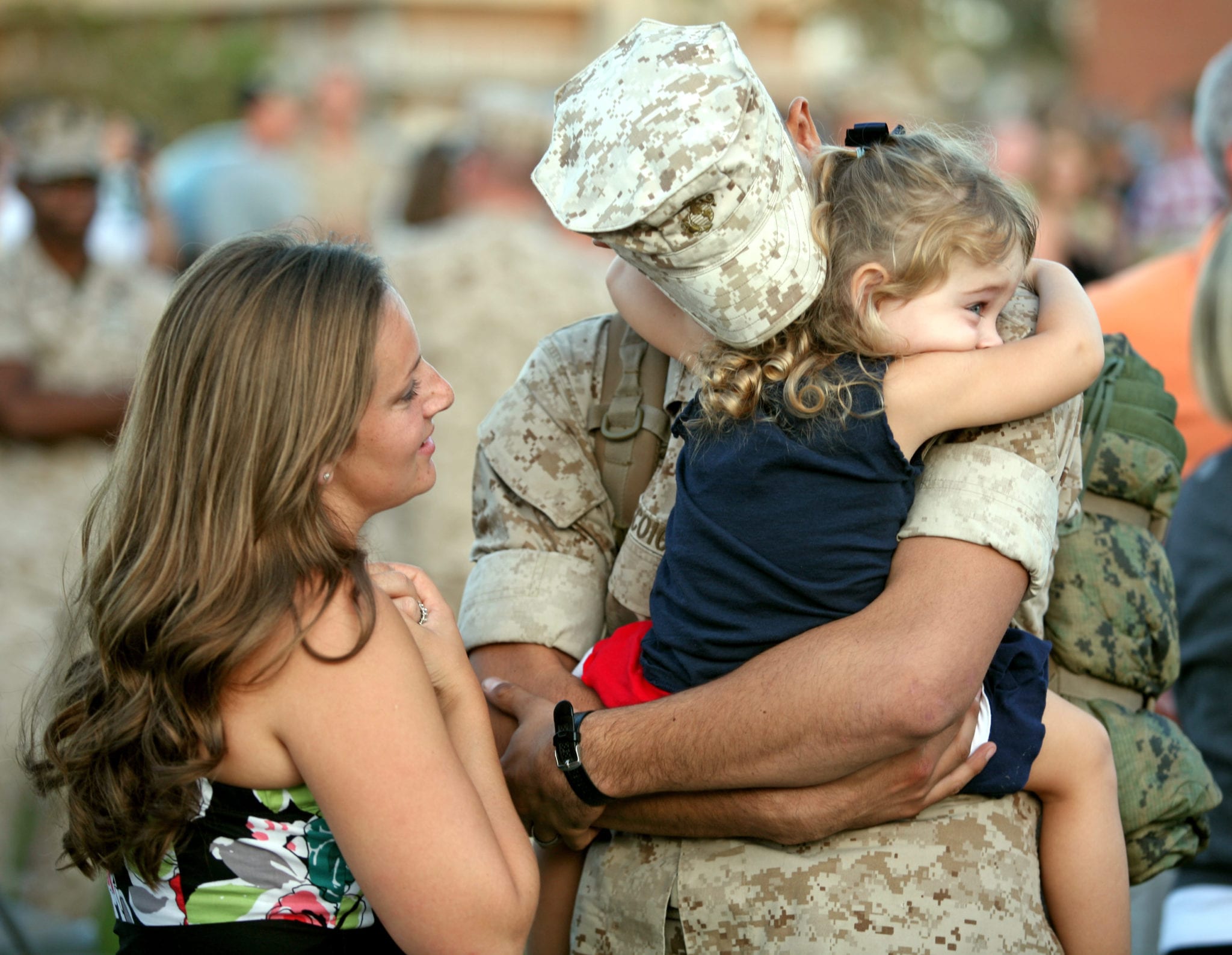 Knowing God values and cares for you is vital to your resilience in this situation. You need to constantly exist in the Lord’s truth that you are a wonderful and loved child of God, rather than whatever lies are being thrown at you by life right now. When you feel stupid or worthless or like all you do is make things harder for others, take a minute to talk to God and remember that he created you with great love and with a purpose—to communicate his love and glory to everyone in your life (It’s not about you; it’s all about God). When you make a habit of living according to his message, rather than the world’s, you will find it easier to handle the stress and pain in life. More than that, you will find yourself capable of relieving others’ stress and pain, by following God faithfully and seeking to communicate love at every opportunity!

There’s another side to your situation, and that is knowing how to use the resources around you to help you deal with your mom or dad just not being the same. Talking with a chaplain, youth leader, or school counselor is a great first step in reaching out for help. Sometimes they can give you a perspective you had not considered, or point you toward resources, they may even be able to facilitate a bigger conversation between you and your family. In addition to that, there are some great online and on base resources created specifically for helping you and your family acknowledge and handle the problems you face. For some suggestions, check out the 411 and Challenge sections.

If you are wondering whether anyone in the Bible ever experienced this sort of thing, consider the story of Saul. Have you ever heard about how he came to be the first king of Israel? It describes his “coronation” in 1 Samuel 9 and 10. When we first meet him he is a dutiful, unassuming son, who is just looking for his father’s lost donkeys. He wasn’t seeking glory or acting entitled. On top of that 1 Samuel 9:2 describes him as “a handsome man in the prime of life. Saul was a foot taller than anyone else in Israel and more handsome as well.” So humble, hunky, and honorable as well—the whole package.

Shortly after the prophet Samuel anoints Saul, we get this great story about how the Holy Spirit came upon him: “When Saul turned to leave Samuel, God gave Saul a new nature. And everything Samuel had told him happened that day. 10 When Saul and his servant arrived at Gibeah, a group of prophets met him. Suddenly the spirit of God took control of him, and he joined in their ecstatic dancing and shouting.” (1 Samuel 10:9–10) He sounds like the most joyful, God loving, wonderful person you could ever meet. It might remind you of your childhood memories of your dad, or the smile your mom is radiating in her wedding photos—this innate joy and love that seems to shine out from them.

Fast forward now a few years, to around the time that David defeats Goliath, and we find Saul a very different person. He is arrogant and does what he thinks is best, rather than follow God. He is disrespectful to Samuel, the Lord’s prophet, and does not put the good of the people before himself. He did a complete 180! The smiling, joyful, God-focused King Saul is gone and replaced with a greedy, arrogant, fearful, controlling, and angry man.

When David, a guy described as a man after God’s own heart, enters the picture, the contrast is huge, and impossible not to notice! It becomes undeniable, even to the King’s son, Jonathan, how far his father has fallen. King Saul is just not the same. Read some of their story now in the Central Bible Passage section; but know that there are chapters and chapters of stories about Saul acting with such anger and fear and David in return refusing to harm the sovereign King and showing honor to a man who only wants him dead.

These are two instances where Saul explodes at the people close to him. His anger and fear seem to completely dominate him, and all remnants of the humble, God-loving man who was made a king are gone.

As David was returning after killing Goliath and as the soldiers were coming back home, women from every town in Israel came out to meet King Saul. They were singing joyful songs, dancing, and playing tambourines and lyres. 7 In their celebration the women sang, “Saul has killed thousands, but David tens of thousands.” 8 Saul did not like this, and he became very angry. He said, “For David they claim tens of thousands, but only thousands for me. They will be making him king next!” 9 And so he was jealous and suspicious of David from that day on.

10 The next day an evil spirit from God suddenly took control of Saul, and he raved in his house like a madman. David was playing the harp, as he did every day, and Saul was holding a spear. 11 “I’ll pin him to the wall,” Saul said to himself, and he threw the spear at him twice; but David dodged each time.

12 Saul was afraid of David because the LORD was with David but had abandoned him. 13 So Saul sent him away and put him in command of a thousand men. David led his men in battle 14 and was successful in all he did, because the LORD was with him. 15 Saul noticed David’s success and became even more afraid of him. 16 But everyone in Israel and Judah loved David because he was such a successful leader.

This story comes after David and Jonathan, Saul’s son, have become close friends. Jonathan is no longer able to deny that his father is just not the same; in fact, he is afraid that Saul will try and kill David at the upcoming festival. So he sends David away and says he will find out if it is safe for his friend to return.

So David hid in the fields. At the New Moon Festival, King Saul came to the meal 25 and sat in his usual place by the wall. Abner sat next to him, and Jonathan sat across the table from him. David’s place was empty, 26 but Saul said nothing that day, because he thought, “Something has happened to him, and he is not ritually pure.” 27 On the following day, the day after the New Moon Festival, David’s place was still empty, and Saul asked Jonathan, “Why didn’t David come to the meal either yesterday or today?”

28 Jonathan answered, “He begged me to let him go to Bethlehem. 29 ‘Please let me go,’ he said, ‘because our family is celebrating the sacrificial feast in town, and my brother ordered me to be there. So then, if you are my friend, let me go and see my relatives.’ That is why he isn’t in his place at your table.”

30 Saul became furious with Jonathan and said to him, “How rebellious and faithless your mother was! Now I know you are taking sides with David and are disgracing yourself and that mother of yours! 31 Don’t you realize that as long as David is alive, you will never be king of this country? Now go and bring him here—he must die!”

33 At that, Saul threw his spear at Jonathan to kill him, and Jonathan realized that his father was really determined to kill David. 34 Jonathan got up from the table in a rage and ate nothing that day—the second day of the New Moon Festival. He was deeply distressed about David, because Saul had insulted him.

Dear Jesus,
My life makes no sense. I thought this was supposed to be a happy time. Why did I wait and look forward to this? I don’t understand what is going on and I am discouraged that things aren’t getting better. How do I trust you? How do I love you and others? Help me understand and help me know what to do. Give me clarity and confidence. Help me to know that you love me and help me to know how to love others. I’m trying to trust you. Please show me how.
Amen